SEOUL, Feb. 1 (Yonhap) -- Global sales of cars produced by five South Korea-based automakers shrank slightly from a year earlier in January due to a decline in overseas sales and a slump in domestic sales, data released by the carmakers showed Wednesday.

The combined global sales of the five automakers came to 618,930 cars last month, down 1.2 percent from a year earlier, according to the data.

The January tally marks a decline for two consecutive months on a year-on-year basis. In December, the automakers' sales also slipped 1.3 percent on-year.

Led by Hyundai Motor Co., the five carmakers sold a combined 106,210 cars in the domestic market last month, down 0.1 percent from 106,281 units a year earlier.

Its domestic sales plunged 9.5 percent on-year to 45,100 units last month due to shortened work days stemming from the Lunar New Year holidays that fell at the end of last month and increased competition with rivals here.

However, its overseas sales rose 3.1 percent to 297,507 units over the cited period.

No. 2 player Kia Motors suffered on-year sales drops both at home and abroad in January due to aged models and lost production from the holidays.

GM Korea sold 46,842 cars last month, 4.8 percent less than a year ago although its local sales increased by some 25 percent.

The company said the overall sales increase came despite negative factors such as less number of working days from the Lunar New Year holiday and the end of the grand sale period.

Tivoli models continued on their popularity streak at home, selling 3,851 units, an increase of 19.5 percent on-year. 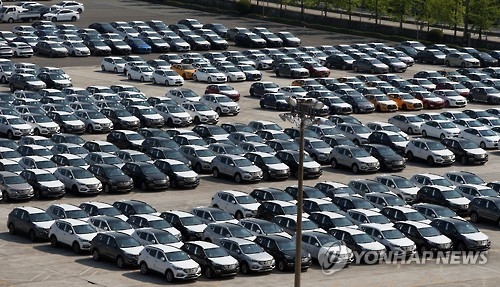