Ban, who stood as the most favored candidate in the conservative bloc, announced he will not run for the presidency, expressing disappointment with South Korea's antagonistic politics.

According to the latest survey conducted by The Segye Times on Monday, Ban held an approval rating of 13.1 percent.

He was followed by Acting President and Prime Minister Hwang Kyo-ahn who received 8.3 percent. Hwang has yet to announce his presidential bid but did not rule out the possibility of running for the top office.

Hwang has been serving as the acting president since President Park Geun-hye was impeached by parliament on alleged corruption in December.

Due to the lack of popular candidates, pundits expect Rep. Kim Moo-sung of the Bareun Party, who formerly headed the ruling Saenuri Party, may reverse his recent renouncement of his presidential bid. 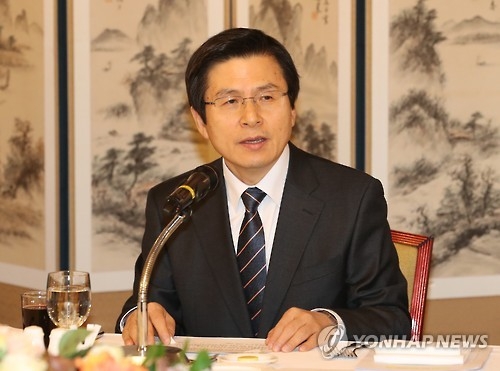 As Ban bows out, acting president emerges as alternative for conservative bloc

As Ban bows out, acting president emerges as alternative for conservative bloc