SEOUL, Feb. 2 (Yonhap) -- Kwon Kyung-won, who recently became the second most expensive South Korean footballer after signing with a Chinese club, said Thursday he is targeting a spot on the national team for the upcoming World Cup qualifiers.

Kwon last month joined Tianjin Quanjian from Al Ahli of the United Arab Emirates with a transfer fee of US$11 million. It was the second-highest transfer fee for a South Korean footballer behind Son Heung-min, who left Bayer Leverkusen in 2015 for Tottenham Hotspur in a deal reportedly worth 30 million euros (US$32 million).

Despite his market value, Kwon has yet to play for the South Korean senior national team. He only has four appearances for the under-23 side.

"I will always try to maintain my best form because you never know when you will get a national team call-up," Kwon said in a phone interview. "If I can get the chance, I want to play without regrets."

In the final Asian qualifying round for the 2018 FIFA World Cup, South Korea are in Group A with Iran, Uzbekistan, Syria, Qatar and China. South Korea are currently second in the group after earning 10 points from three wins, one draw and one loss.

South Korea, looking for their ninth consecutive World Cup appearance, are scheduled to face China on the road on March 23 for their sixth match in the final round.

Kwon is a hard-working defensive midfielder but can also play as center back and full back. He said his versatility and good tactical understanding can help the national team.

"I want head coach Uli Stielike to know that there are many footballers who are working everyday to play for the national team," Kwon said. "I can be flexible on the pitch depending on the coach's style and tactics." 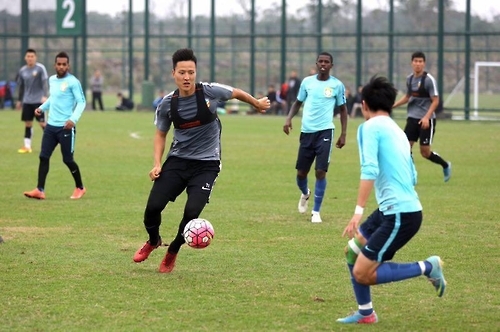 Kwon hopes to join other South Koreans in the Chinese Super League (CSL) who have already played for the national team. Defenders Hong Jeong-ho, Jang Hyun-soo, Kim Kee-hee and Kim Young-gwon, along with defensive midfielder Jung Woo-young, have been regulars on Stielike's watch.

At Tianjin, Kwon is coached by former FIFA World Player of the Year Fabio Cannavaro. The South Korean can also play alongside star players like Belgian midfielder Axel Witsel and Brazilian striker Alexandre Pato. They are currently in Catania, Italy, for winter training camp.

"As a defensive player, I'm very excited and thankful to have Cannavaro as a coach," he said. "You don't even need to talk about players like Pato. I'm learning things like how they manage their fitness by watching them on and off the pitch."

Kwon made his pro debut with the South Korean club Jeonbuk Hyundai Motors in 2013 and was sold to Al Ahli two years later with a transfer fee of $3 million. Now with the newly promoted CSL side Tianjin, he will reportedly make $3 million a year.

"It would be a lie to say that I don't feel the pressure about my big transfer fee or salary," he said. "But I believe there will be good results if I work twice as hard as I did in the past."

The Chinese Football Association recently announced it will limit the number of foreign players permitted to play in the 2017 season. The CSL clubs can now deploy three foreign stars on the pitch.

Previously, teams were permitted four non-Chinese players, and one had to come from an Asian Football Confederation country. But under the new policy, the Asian player quota has been abolished. The decision has been perceived as a big disadvantage for South Korean players.

Kwon said he is ready to take on challenges and give his best effort forward.

"Good luck never follows unless you work hard enough," he said. "When you earn something difficult, you don't lose easily." 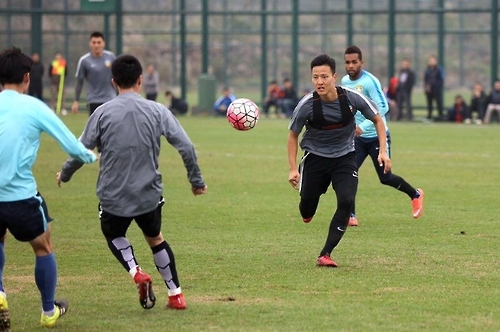