SEOUL, Feb. 1 (Yonhap) -- Hyundai Motor Group's new headquarters building to be constructed in southern Seoul by 2021 will be the country's tallest, a district office said Wednesday.

Its draft document for environmental impact assessment submitted to the Gangnam Ward Office showed that the main building of the planned Global Business Center (GBC) will be 569 meters tall.

The district office said it will publicize the assessment report to residents from Thursday to early next month to gather their feedback, pledging a thorough examination of its possible impact on traffic and the environment.

The building and the encompassing GBC area will host offices, hotels and shopping centers.

Along with the adjacent Convention and Exhibition Center (COEX), the GBC is expected to become a new hub for the country's meetings, incentives, conferences and exhibitions (MICE) industry, experts say.

"The Seoul city government should promptly review the plan and deliver approval so that construction can begin in the first half of this year," district official Lee Hee-hyun said. 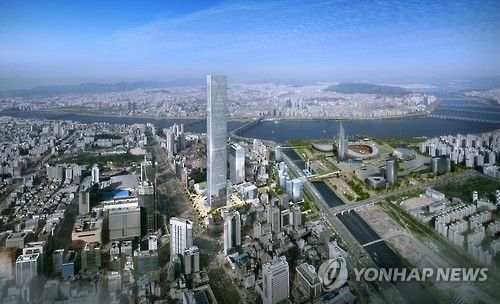