SEOUL, Feb. 1 (Yonhap) -- From relentless political offensives by his feisty rivals to a deluge of malicious reports and sprawling corruption allegations against his relatives, the reality of domestic politics was much tougher than what former U.N. chief Ban Ki-moon expected.

In a surprise announcement on Wednesday, Ban, long considered an odds-on conservative contender in this year's presidential race, renounced his ambitions for the country's top elected office, upending his drive for a "change in politics and grand national integration."

"Over the short period of the last three weeks, I have talked about my ambitions to achieve grand national integration by unifying divided public opinion," he said during an impromptu press conference at the National Assembly. 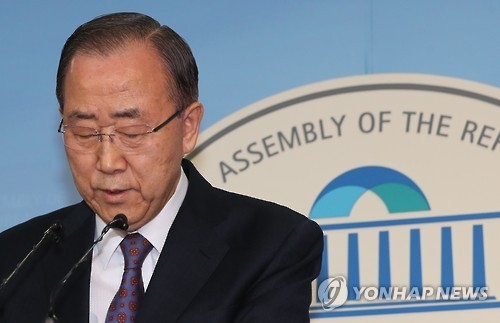 "But my pure patriotism and ambitions, along with my cause for a change in politics, have dissipated due to slander close to personality murder and various fake news reports."

Even before his arrival in Korea last month after 10 years of service as the U.N. helmsman, Ban, a political neophyte, faced a salvo of attacks from opposition parties, as he had maintained an unrivaled lead among conservative presidential hopefuls.

Ban did not officially declare his bid for the presidential office, but repeatedly signaled his intention to run in the election, vowing to use his experience at the world body to help advance the country.

As Ban was angling for the presidency, opposition politicians issued sharply worded statements such as those urging him to maintain his "dignity" as a former U.N. chief rather than dabbling into politics.

Some upbraided his recent call for a pre-election amendment of the country's decades-old Constitution as a "political gambit" to rally like-minded politicians behind him ahead of the key election.

Corruption allegations against him and his relatives have continued to plague him.

A local magazine has reported that Ban received around US$230,000 from Park Yeon-cha, a local businessman, while serving as South Korea's foreign minister in the 2000s. Ban has called the report ill-founded and threatened to take legal action against the magazine.

Progressive media had also gotten in the way of him bolstering his electoral prospects.

For instance, some media reported on his visit to the tomb of his father in his hometown of Eumseong, 131 kilometers south of Seoul, two days after his return to Korea.

There, he carried out family-administered worship to pay respects to his late father. In media reports, he was seen drinking a glass of alcohol rather than throwing it around his father's tomb in the country's tradition.

After the scene was reported, sharp criticism circulated online with many questioning whether he was ignorant of the tradition. But Ban's aides said he just sipped it after throwing it at the tomb, and expressed displeasure over the broadcasts accusing him of breaching tradition.

The past remarks that he made while in office at the U.N. also posed an unexpected hurdle to his move to bolster his political profile.

After Seoul and Tokyo signed a deal in 2015 to settle the long-standing issue of Japan's wartime sexual enslavement of Korean woman, Ban espoused it. But his support for the deal drew criticism here as many, including victims, refused to accept the controversial deal.

A widening popularity gap between him and his main rival Moon Jae-in, a former leader of the main opposition Democratic Party, might have also affected Ban's decision to drop out of the presidential race. 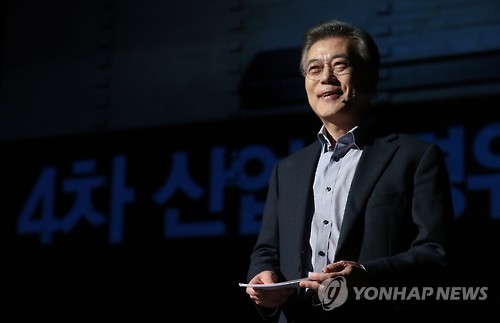 A recent poll, conducted this week by local pollster Research & Research, showed Moon with 32.8 percent support. Ban garnered a rating of only 13.1 percent.

With Ban's renouncement, Moon is expected to maintain an unassailable lead for the time being, observers said.

Ban's exit from the presidential race has unnerved conservative parties, leaving them scurrying to find an alternative. The conservative camp had sought to court Ban as its standard-bearer, as other potential candidates struggled with their ratings boxed in the single digits.

Amid the conservative bloc's search for a new, viable candidate, Acting President and Prime Minister Hwang Kyo-ahn has emerged as a potential candidate. In the latest poll, Hwang's support was tallied at 8.3 percent, the highest figure among potential conservative contenders.

Hwang has remained noncommittal about his presidential ambitions, saying he would, "for now," focus on stabilizing state affairs hamstrung by the impeachment of President Park Geun-hye over corruption allegations.

Meanwhile, diplomatic circles here appeared disheartened at Ban's decision, as they hoped the former foreign minister can use his diplomatic capital to the fullest that he built through his role as the U.N. chief in promoting world peace and gender equality, and fighting poverty, crimes and climate change.

"It is just dispiriting," a diplomat said, asking not to be named.

The ruling Saenuri Party expressed regret, portraying Ban's decision to leave the race as a "loss of big assets."

Choo Mi-ae, the leader of the Democratic Party, pointed to Ban's short experience in politics, expressing hopes that he can contribute to his country with his longtime experience on the world stage.