WASHINGTON, Feb. 1 (Yonhap) -- U.S. Defense Secretary Jim Mattis departed for South Korea on Wednesday in his highly symbolic first overseas trip designed to underscore the U.S. security commitment to the Asian ally in the face of a saber-rattling North Korea.

The trip, which also includes a stop in Japan later this week, comes as tensions are running high on the Korean Peninsula after North Korean leader Kim Jong-un said the country is close to test-firing an intercontinental ballistic missile apparently capable of reaching the U.S.

More than anything else, the trip is aimed at reassuring key Asian allies unsettled by U.S. President Donald Trump's campaign rhetoric accusing them of free-riding on U.S. security commitments, though Trump has significantly toned it down since the election and has talked increasingly about the importance of alliances. 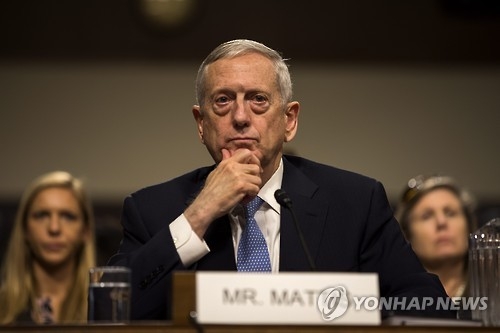 Earlier this week, the two spoke by phone, during which Mattis reaffirmed the "U.S. commitment to defend the ROK and provide extended deterrence using the full range of U.S. capabilities," according to the Pentagon.

Mattis also told Han that the U.S. will "stand shoulder-to-shoulder with the ROK forces" and the two sides agreed to take steps to strengthen the alliance further to defend against the evolving North Korean threat," according to the Pentagon.

According to officials in Seoul, Mattis and Han also reaffirmed the planned deployment of the U.S. THAAD missile defense system in South Korea this year to defend against North Korean missile threats. China has denounced the upcoming deployment as detrimental to its security, despite repeated assurances from Washington and Seoul that the system is purely defensive.

During his confirmation hearing last month, Mattis said the North's nuclear and missile development is "a serious threat and we've got to do something about it." Asked if "necessary force should be on the table" to deal with the threat, Mattis said, "I don't think we should take anything off the table."

He is a strong advocate of alliances.

In a message to Pentagon employees shortly after his confirmation, Mattis vowed to work closely with the State Department to strengthen our alliances, saying he recognizes "no nation is secure without friends." During the confirmation hearing, Mattis also said the U.S. is "stronger when we uphold our treaty obligations."

Other topics that could come up during Mattis' talks with Han include defense cost-sharing.

Trump pledged on the campaign trail to have wealthy allies like South Korea and Japan shoulder more of the cost of American troops stationed in the countries, saying the U.S. should prepared to withdraw the troops unless the allies agreed to pay more.

Trump has toned down the campaign rhetoric since the election. Still, he spoke critically in his inauguration address of spending money to help defending allies, saying the U.S. has "subsidized the armies of other countries" and "defended other nations' borders."

Many agree that the troop presence is also in line with U.S. interests in a region marked by China's rise.