SEOUL, Feb. 2 (Yonhap) -- President Park Geun-hye's birthday a year ago was filled with an air of festivity with her secretaries and Cabinet ministers attending celebratory events at her office, though the mood was slightly dampened by North Korea's nuclear test the previous month.

But her 65th birthday on Thursday appeared subdued with no public figures coming forward to openly congratulate the suspended president who has been grappling with a probe into her corruption allegations and an impeachment trial. She only planned a luncheon with her top aides.

Park was suspended from exercising all powers on Dec. 9 after the National Assembly impeached her over a supposed influence-peddling scandal revolving around her friend Choi Soon-sil. Prime Minister Hwang Kyo-ahn has since been serving as the acting president.

"The president plans to spend her birthday calmly preparing for her legal response to the (ongoing) probe by the independent counsel," her aide told Yonhap News Agency over the phone, asking not to be named. 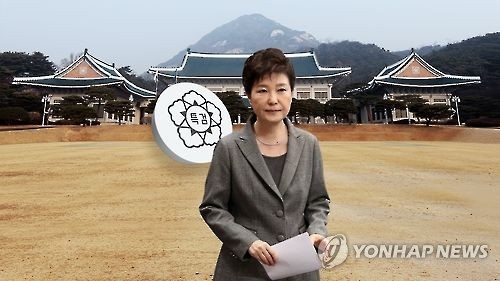 With the probe team's face-to-face questioning expected to take place as early as next week, Park has concentrated on firming up her legal rationale to repudiate a slew of corruption charges that have dogged her since the scandal was brought to the fore in late October.

Park is accused of having colluded with Choi in extorting money and favors from local conglomerates, such as Samsung Group. She is also alleged to have allowed her friend, with no government post, to meddle in important state affairs.

The probe team is also looking into the allegations that the president played a role in creating and managing a blacklist of artists -- critical of her government -- to bar them from getting any state support.

Park has repeatedly denied all the allegations, calling them "preposterous, colossal lies."

Adding to the downbeat mood at the presidential office Cheong Wa Dae is the special prosecutors' upcoming raid. The investigators are expected to search the office sometime this week, but Cheong Wa Dae has opposed it, citing security concerns.

An accelerating impeachment trial has also been weighing heavily on Park's mind, at a time when her attorneys want sufficient time to build their case at the Constitutional Court.

The top court has to decide whether to unseat or reinstate Park by early June. But its former chief Park Han-chul, whose six-year term ended last month, called for its ruling to be rendered by March before another justice's term ends.

The former justice warned that an additional vacancy on the nine-member bench could lead to a "distorted" ruling. The president's ouster requires the approval from at least six justices.