The country's retail sales index expanded 1.6 percent in December from the same month a year earlier, according to the data by Statistics Korea.

The gain was bolstered by a 4.9 percent on-year increase in sales of nondurable consumer goods, though shipments of cars and other durable goods shrank 2.3 percent.

His remarks are backed up by growing sales at convenience stores and supermarkets frequented by lone diners or drinkers. 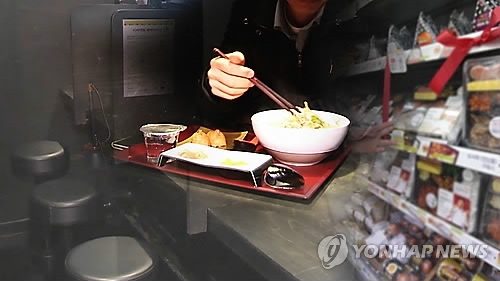 Sales at convenience stores jumped 13.9 percent in December from a year ago, and supermarkets registered a 2 percent rise in sales. In December 2015, supermarket sales dropped 2.5 percent on-year.

Sales at online and homeshopping retailers, which are favored by people who live alone, also surged 17.4 percent and 10 percent from a year ago, respectively.

Surging consumption by lone diners and drinkers is largely attributed to a rapid rise in the number of one-person households in South Korea. In 2015, single-member households numbered 5.2 million, accounting for 27.2 percent of the total households and becoming the most common household type in Asia's fourth-largest economy.

"The latest consumption pattern is related to the increase in single-person households," Kim said. "Lone diners and drinkers frequent convenience stores and supermarkets in their neighborhoods instead of visiting large discount stores away from their homes."
(END)