SEOUL, Feb. 2 (Yonhap) -- South Korean flag carriers will soon be required to carry rope and even handcuffs on each of their flights to restrain passengers causing violence or a disturbance during the flight, the government said Thursday.

The Ministry of Land, Infrastructure and Transport said it will also require flight attendants to film any in-flight incidents to be used as evidence.

Such changes will be made in a revision to airline safety regulations announced Thursday, it said.

"Airlines will be asked to revise their own safety rules following the administrative announcement," a ministry official said.

The move is the latest measure against in-flight violence, which was highlighted late last year when a drunk South Korean man went on a near rampage on a Korean Air flight from Vietnam to South Korea. 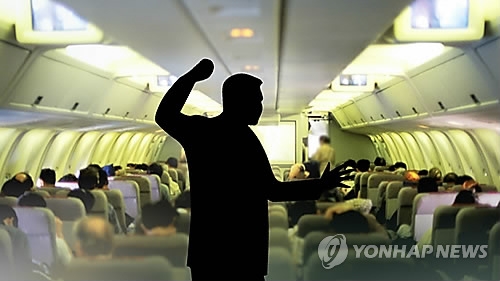 The government earlier said it will revise related laws to allow more active use of taser guns against in-flight violence.

Ministry officials said recorded footage of in-flight violence will allow prosecution of those causing such violence, noting a lack of hard evidence had often led to the acquittal of suspects in the past.

Currently, only aviation safety agents are required to record footage of in-flight violence. Under the revision, all flight attendants will be required to do so when necessary.

"The ministry decided to add the new provision after consulting with the airport police department. This will allow more efficient and effective prosecution of suspects with in-flight violence," an official said, while speaking on condition of anonymity.
(END)