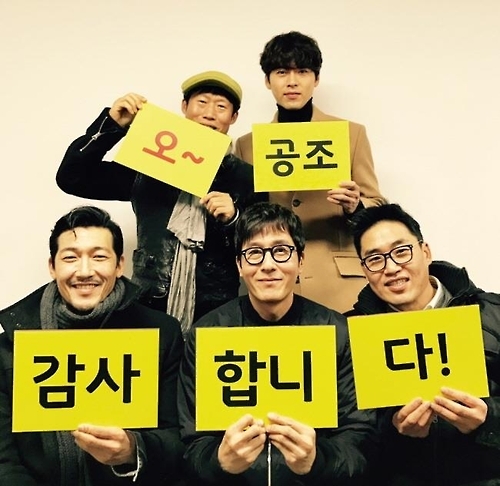 SEOUL, Feb. 2 (Yonhap) -- South Korean comedy-action film "Confidential Assignment" topped 5 million in attendance in only 15 days since its release in local theaters, data from a market tracker showed on Thursday.

The film passed the milestone to reach 5,046,970 on Wednesday, according to the Korean Film Council (KOFIC), the government agency for the promotion of Korean films.

The two homegrown movies have been competing for the top spot ever since their premiere on Jan. 18. "Confidential Assignment" began as the runner-up in its opening weekend but claimed the top spot from the second weekend and continued to soar ever since.

Helmed by Kim Sung-hoon of "A Wonderful Moment" (2012), the movie tells the story of two cops from South and North Korea who team up for a joint covert operation to hunt down a North Korean crime ring that has sneaked into the South.