Ban, who had been a leading conservative candidate, was viewed as a real threat for the presidential ambitions of Moon Jae-in, a contender representing the opposition, until Ban decided to drop out Wednesday.

During an interview with YTN Radio, however, Lee said Moon's solid approval rating was based on the progressive voters' anxiety against a strong conservative candidate like Ban.

"Although (Moon) is the No. 1 candidate in the opposition bloc, there seems to be a ceiling to his (approval ratings)," Lee said. "(Moon) is overwhelmingly strong, but he is also stagnant, and it will not be easy for him to expand further."

Lee had been suggesting that Ban would not be able to finish the race since the former U.N. head's presidential ambitions emerged last year.

The Seongnam mayor reiterated that hopefuls from the opposition bloc must unite to continue pushing forward liberal reforms even after the presidential race. 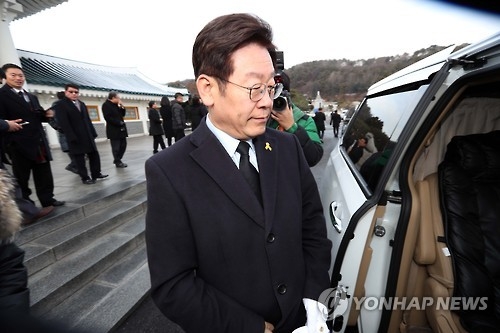