Lee Kun-hee, father of Jae-yong and who has been hospitalized since May 2014, will also receive 190 billion won in dividends, according to the Financial Supervisory Service's (FSS) electronic information system.

The Lee family, which controls South Korea's largest conglomerate via a complicated web of cross-shareholdings, will likely take a total of more than 280 billion won in this year's dividends. 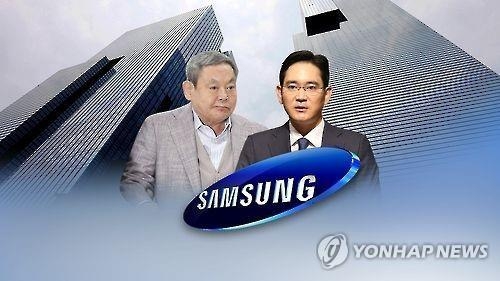 Samsung Electronics, the group's crown jewel, announced earlier it would raise its annual dividend payout to around 3.85 trillion won in a program to enhance "shareholders' value."

The smartphone and semiconductor maker will dole out a dividend of 27,500 won per common share and 27,550 won per preferred stock.

Lee Kun-hee holds 4.98 million common stocks and 12,398 preferred ones in the electronics giant.

He earned around 100 billion won in its dividend payout last year, plus some 77.4 billion won of dividends from other Samsung affiliates.

Meanwhile, Chung Mong-koo, chairman of Hyundai Motor Group, will earn 46 billion won in dividends from Hyundai Motor and Hyundai Steel this year, almost the same as that of last year.

His son Chung Eui-sun, vice chairman of the group, will be paid a combined dividend of 23.9 billion won.