During a regular meeting of ministers on pending state affairs, Hwang warned that the government will take "stern measures" against companies that are negligent of workplace safety obligations.

"If companies are found to have caused industrial accidents in their subcontractors by being negligent of safety measures, (the government) will take stern measures by holding them strictly responsible," Hwang said. 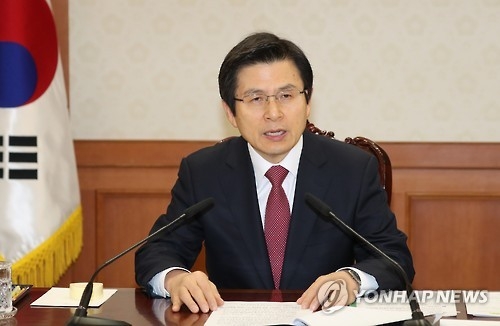 "Companies should boost safety management efforts as subcontractors with weak capabilities have a limit in securing safety," he added.

Last year alone, some 960 workers died from industrial accidents, with the number of deaths in the construction sector having risen 14 percent from a year earlier, the acting president noted.

Hwang stressed the need to provide companies trying hard to fend off any accidents with various incentives, such as cuts in industrial insurance rates, and technological and educational assistance.

"If we follow basic safety rules well, we can prevent damage to our workers," he said. "Thus it is more important than anything else to ensure that all workers make safety part of their lives."