After rehabbing a hand injury since September, Park left for Florida, where he will continue his offseason workouts before joining the Twins' spring training later this month.

The two-time Korea Baseball Organization (KBO) MVP with two 50-homer seasons here called his big league rookie campaign "a big disappointment." As the team's primary designated hitter, Park batted just .191 with 12 home runs and 24 RBIs in 62 games. He was demoted to the minors in July and his season ended prematurely in August with an injury to his right middle finger.

Following a longer offseason than others, Park said he's prepared to battle others for playing opportunities.

"This year will be clearly more difficult than last year, but I've been working hard because I knew what went wrong last year and knew what I had to do to fix it," Park told reporters at Incheon International Airport. "I am confident and ready. I'll do the best I can and try to win the regular job, be it at first base or DH." 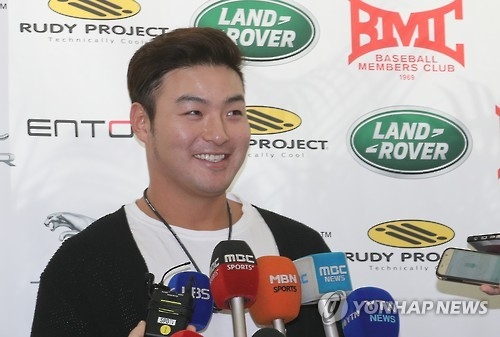 Specifically, Park said he's adopted a more compact swing, though the changes are so subtle that he doesn't think the naked eye would be able to detect any difference from his previous one.

Park said he was compelled to make the change because his inability to catch up to big league fastballs was his greatest undoing in 2016. He struck out 80 times in 215 at-bats as a rookie, a rate he'd certainly like to see go down in 2017.

"Simply put, I couldn't get my timing down, and I worked on a swing that I felt would help me hit fastballs better," Park said. "I tried to make some changes during the season, but it affected my balance. I had a lot of time to work on it during the offseason"

Park insisted the new swing hasn't come at the expense of his prodigious power. Some of Park's dozen home runs were moon shots that made highlight reels across the majors, and he will have to keep providing the power for the only big league club to lose more than 100 games in 2016.

Park signed a four-year, US$12 million contract late 2015, and he admitted the Twins gave him plenty of opportunities right away. This year, though, Park said he will have to earn everything.

"I'll have to go all-out right from spring training," Park added. "I guess I had an excuse to make last year with my injury, but I'm not feeling any pain right now."

Park said he also wants to make changes to his mental approach. The soft-spoken one said he has been a brooding type but now wants to have a shorter memory.

"I need to forget about bad games quickly and get ready for the next day," he said. "Last year, I kept thinking too long and hard about each and every game."