SEOUL, Feb. 2 (Yonhap) -- Rep. Yoo Seong-min, a potential presidential contender from the Bareun Party, said Thursday that Acting President and Prime Minister Hwang Kyo-ahn should clarify his political ambitions, amid the outlook he may run for the country's top office.

"If Hwang plans to run for president, he should immediately express the intention and step down from his post," Yoo said during an interview with CBS Radio. "If the acting president only thinks of the presidential election, he will be distracted in his duties on state affairs."

Hwang, who serves as the country's acting president following President Park Geun-hye's impeachment, has been cited as one of the preferred figures from the conservative bloc.

While the acting president never expressed his presidential ambitions, he also has been refusing to directly rule out the possibility. As former U.N. Secretary-General Ban Ki-moon, who had been a leading potential contender from the conservative bloc, stepped down from the race, pundits expect Hwang's popularity may gain traction further down the road.

"The old and corrupted conservatism from the past cannot win the hearts of the people," Yoo also said, pointing out Hwang served as the justice and prime minister under the incumbent administration.

The lawmaker said as the country has 60 days to hold the presidential election if the Constitutional Court approves Park's ouster, the people should be allowed to review the capabilities and ethics of all candidates, indicating Hwang should also take such factors into consideration. 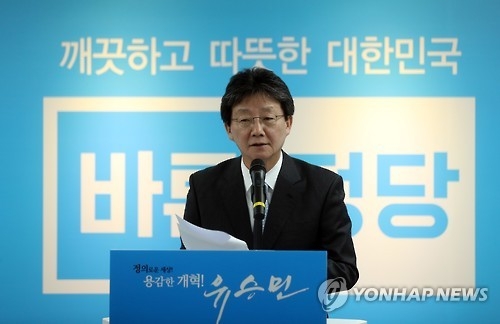