The vice minister appeared at the office of the special investigation team in southern Seoul to undergo questioning over suspicions the presidential office Cheong Wa Dae was behind the state support given to Dr. Kim Young-jae's wife, Park Chae-yoon.

Investigators are looking into the company run by the wife that received government research and development funding.

The special counsel on Wednesday sought a warrant to formally detain the wife on charges of bribing former senior presidential secretary An Chong-bum, who is standing trial over alleged wrongdoings that surfaced following the outbreak of the scandal.

Jeong is not the only high-level government official to be quizzed by the investigation team. Since its launch late last year, the special counsel has summoned a number of former and current ministers and ambassadors embroiled in the scandal. Culture Minister Cho Yoon-sun, who was formally arrested last month, resigned in the process.

Kim also underwent questioning by the investigators last month for treating the president with injections, based on his ties to Choi Soon-sil, without going through due safety checks. Choi, a longtime friend of the chief executive, is currently standing trial over a string of corruption charges. 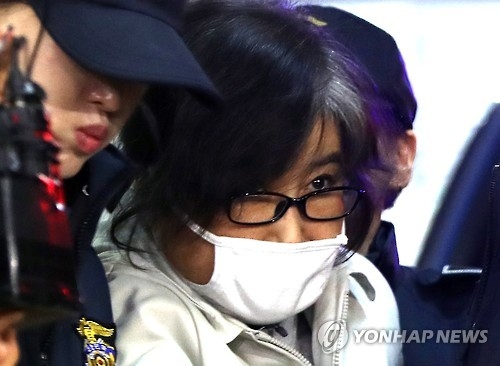 Earlier in the day, Choi appeared at the investigation team's office as it executed the second arrest warrant issued against her after she repeatedly declined to answer its summons. The writ, which the probe team executed Wednesday, is valid for 48 hours after it takes effect.

The probe team, led by Independent Counsel Park Young-soo, has been accelerating its investigation into the scandal that led to President Park's impeachment last year.

A police officer was called in to undergo questioning on the same day over allegations an ex-senior presidential secretary Woo Byung-woo exerted influence so his son, who was conscripted to serve with the police, could get an easy posting.