BEIJING, Feb. 2 (Yonhap) -- The price of imported Korean cosmetics in China dropped by some 40 percent last year, Chinese customs data showed Thursday, for reasons industry watchers see as driven both politically and by the market.

Records from the Tianjin Entry-Exit Inspection and Quarantine Bureau indicated an average 40 percent drop in the price of cosmetics shipped in from South Korea. The volume of the imported shipments totaled 2,200 tons last year, down 46 percent from the year before.

The monetary value of the imports reached US$23 million, down 69 percent. The import volume, which had nearly doubled in 2015, fell back to the level of 2013, data indicated.

The numbers translate to an average $11 per kilogram of imports, down from the previous $18.

The two countries' relations, persistently challenged by the differences in the way their governments deal with North Korea, have recently roiled over Seoul's decision to host an advanced U.S. missile defense system, known as THAAD, which Beijing argues is also aimed at China. Beijing has retaliated by imposing bans on Korean culture content and a number of import items, and restricting travel to South Korea.

Industry officials say that the South Korea-China free trade agreement that took effect in December 2015 and China's lowering of the consumption tax on cosmetics also pushed down the prices, with competition with global brands stiffening for South Korean companies.

Market watchers are predicting more price markdowns this year, as some of the Korean exporting companies already have made downward adjustments.

AmorePacific, South Korea's biggest cosmetics firm, lowered the price on 327 products by between 3 and 30 percent in January.

"The cosmetics prices are becoming more transparent as online and direct shopping grow at a fast speed," an industry official said. "It's inevitable for foreign cosmetics companies to change their retail prices in China." 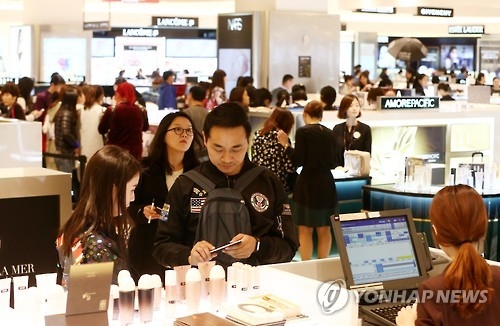