SEOUL, Feb. 2 (Yonhap) -- Acting President and Prime Minister Hwang Kyo-ahn on Thursday rejected political parties' calls to attend a parliamentary interpellation session next week, citing the possibility of a government vacuum at a time of a national crisis.

Hwang's rejection came a day after former U.N. chief Ban Ki-moon renounced his presidential ambitions -- a surprise decision, which observers say could help boost the acting president's prospects in this year's presidential race. Hwang has so far remained noncommittal about whether he will run in the election.

"There is a possibility of a governance vacuum triggered by a failure to handle a sudden crisis situation during (my attendance) at the parliamentary session for long hours," Hwang said in a press release.

"I call on the National Assembly to reconsider its request for the prime minister to appear at the session."

The one-month parliamentary extraordinary session kicked off on Wednesday. The ruling and opposition parties have decided to hold a two-day interpellation session starting next Thursday.

Hwang attended a parliamentary session in December. But he said his attendance at the time was to respond to "citizens' calls" to explain his direction for the handling of state affairs and based on his understanding that the parties demanded his attendance only in the December session.

He, in addition, underscored the importance of "close communication and cooperation" with parliament for the stable management of state affairs. 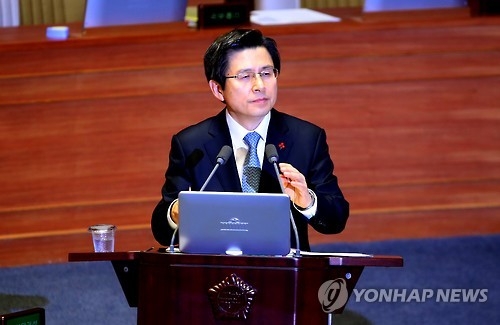