SEOUL, Feb. 2 (Yonhap) -- North Korean soldiers have been seen crossing into China to illegally cut trees for firewood as part of efforts to beat the cold as they suffer a shortage of heating timbers, a U.S. broadcaster reported Thursday.

"An increasing number of North Korean border guards who risk being caught cross the border to gather firewood on the Chinese side," a source in northern Yanggang Province told Radio Free Asia.

The source said a squad tasked with preparing meals once a week is supposed to take care of securing firewood, adding that "a team of three soldiers carrying a sled goes on an expedition to a desolate mountain in China about 15 kilometers away from their sentry post."

Even soldiers at border garrisons who have some money obtained from smugglers cannot afford heating and cover themselves with a blanket over their winter clothes when they sleep in the barracks, the source also said.

A strong warning has come from the North Korean Army's general political bureau that those who damage the Chinese forest are subject to harsh punishment, but military authorities have yet to take measures to save soldiers from the cold, according to the source. 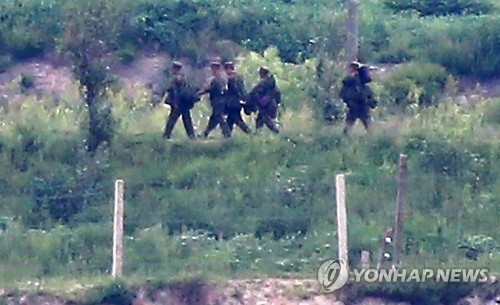 N. Korean soldiers cross into China to get firewood: report

N. Korean soldiers cross into China to get firewood: report