SEOUL, Feb. 2 (Yonhap) -- South Koreans consumed more American and other foreign beef than expensive local beef last year, a move that has lowered the country's self-sufficiency rate for beef to below 40 percent over 13 years, a state-run think tank said Thursday.

Last year, South Koreans consumed 362,000 tons of foreign beef, accounting for 62.3 percent of the total beef consumption in the country, according to the Korea Rural Economic Institute.

South Korea halted imports of U.S. beef in 2003 following the outbreak of a mad cow disease. Seoul lifted the ban in late 2008, which led to mass demonstrations among people in fear of their safety.

Still, the market share of American beef in South Korea has gradually been on the rise in recent years. 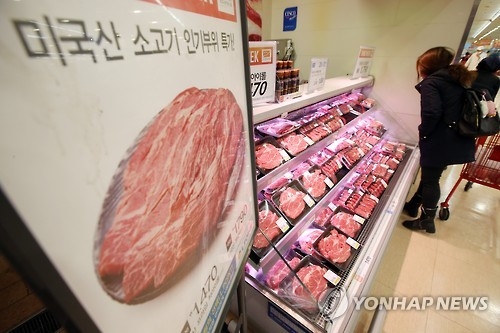 In comparison, South Koreans consumed 219,000 tons of domestic beef, known as hanwoo last year, accounting for 37.7 percent of the total beef consumption in the country, according to the institute.

It marked the first time that South Korea's self-sufficiency rate for beef fell below 40 percent since 2003 when it stood at 36.3 percent.

The wholesale prices of local beef once hit nearly 20,000 won (US$17) per kilogram last year.

The prices of local beef have been on the rise since late 2015 as the number of cattle is continuing to fall.

Domestic farms cut the number of cattle as the prices of local beef went down and the government helped some farms shut down to stem the decline of local beef following a free trade deal with the United States.

South Korea's anti-graft law -- which took effect in September -- is also adding to the woes of the local beef industry.

Local beef was one of the favorite gifts during major holidays, but was overtaken by health products, according to major retailers.

The law imposes tight limits on free meals and gifts that can be accepted by government officials, journalists and private school teachers to try to curb the deep-rooted tradition of excessive hospitality. The maximum value of a gift that a person subject to the law can receive has been set at 50,000 won.