SEOUL, Feb. 2 (Yonhap) -- A local court on Thursday acquitted the head of the country's leading tobacco maker of receiving some tens of millions of won in bribes from a lobbyist for striking a deal with an advertising agency, citing a lack of evidence.

The Seoul Central District Court found Baek Bok-in, who led KT&G Corp. from 2015, not guilty of receiving 55 million won (US$47,000) from the person, surnamed Kwon, between 2011 and 2012 in return for securing a contract with the company.

"The testimony made by the briber lacks credibility," the court said. "It is hard to say that the criminal allegations have been proven without leaving any room for reasonable doubt."

Baek, 51, was also acquitted of helping a witness related to a case on his predecessor Min Young-jin flee the country in 2013 while an investigation was under way.

"KT&G employees, including Baek, had been thinking that the suspicions surrounding Min were not problematic and the case actually ended without indictment in August 2014," the court said.

Separately, Min is standing trial at an appeals court after he was found not guilty of receiving some hundreds of millions of won in bribes from his subordinates and business partners. The Seoul court had freed him of the charges, also citing a lack of credibility in the bribers' statements. 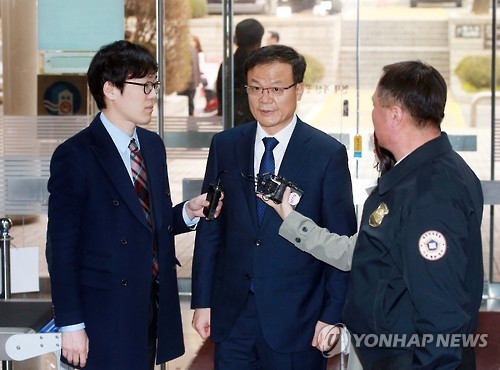