Last month, the party had referred Pyo to its ethics panel for organizing the exhibition that featured the picture titled "Dirty Sleep," in which Park lay naked in a parody of Edouard Manet's "Olympia."

The first-term lawmaker drew fire from both ruling and opposition politicians who criticized that the display was politically inappropriate and sexually abusive.

The punitive measure, though short of expulsion or membership suspension which some demanded, may affect his prospects of nomination for future parliamentary elections.

Pyo said on Facebook that he humbly accepts the decision.

"I simply intended to provide space for the artists victimized by the government's blacklist of cultural figures to raise their demand for freedom of arts and expression, but it resulted in there being many people, including women, feel displeasured and uncomfortable," he said. "I make a sincere apology once again." 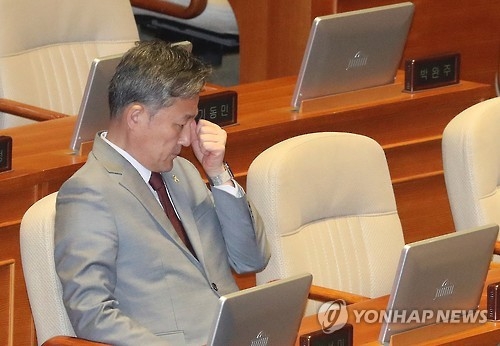