After landing at Osan Air Base in Pyeongtaek, 70 kilometers south of Seoul, at 12:30 p.m., Mattis headed to the U.S. Forces Korea (USFK) headquarters in Yongsan, Seoul, according to the defense ministry.

Mattis was briefed by USFK Commander Vincent Brooks on the security situation on the Korean Peninsula and in the region, including Seoul-Washington's joint readiness against North Korean threats that include the one that it is close to test-firing an intercontinental ballistic missile (ICBM) capable of reaching the U.S. mainland, military officials said.

He is scheduled to attend a dinner event arranged by Defense Minister Han Min-koo at a Seoul hotel after meetings with Prime Minister Hwang Kyo-ahn and National Security Office chief Kim Kwan-jin, they said.

Hwang is currently serving as acting president after President Park Geun-hye was impeached by the National Assembly over an alleged corruption scandal involving a close friend. 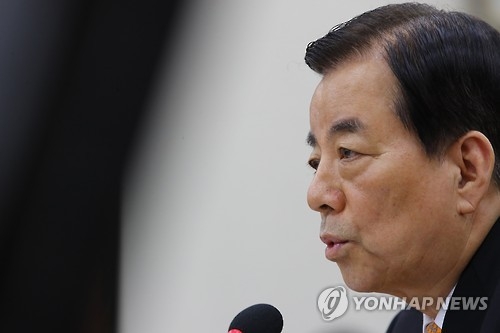 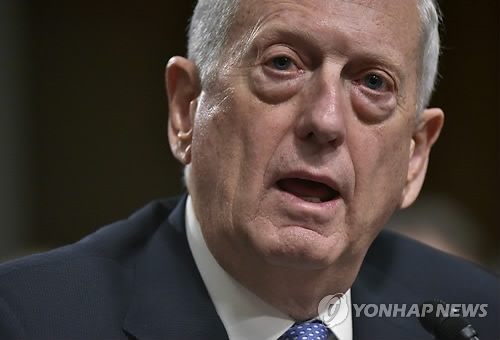 On Friday, Mattis will hold a separate meeting with Han and Foreign Minister Yun Byung-se to discuss the North's nuclear and missile threats, as well as ways to enhance the countries' alliance, the ministry said.

Mattis may bring up the topic of defense cost-sharing during talks with Han.

During his campaign, Trump said wealthy allies like South Korea and Japan should pay more for the upkeep of American troops stationed on their soil and if not, the U.S. military should be withdrawn.

Mattis told reporters on the plane to South Korea that he will talk to his South Korean counterparts about the Terminal High Altitude Area Defense (THAAD) system.

"It is a defensive system. There is only one reason we would have this under discussion right now — that is, North Korea's activities," Mattis said, according to foreign media reports.

In July 2016, Seoul and Washington agreed to deploy the THAAD anti-missile system to South Korea this year to better defend against North Korea's nuclear and missile threats.

But China has explicitly expressed opposition against the THAAD deployment here on concerns that the move could hurt its strategic security interests. The U.S. has repeatedly stressed that the system is purely defensive and aimed only at deterring North Korean threats.

His trip, which also includes a stop in Japan later this week, is aimed at reassuring the key allies unsettled by U.S. President Donald Trump's campaign rhetoric accusing them of free-riding on U.S. security commitments.

In a message to Pentagon employees last month, Mattis vowed to work closely with the State Department to strengthen its alliances, saying he recognizes "no nation is secure without friends."