SEOUL, Feb. 2 (Yonhap) -- Dongwha Duty Free on Thursday confirmed it will hand over a majority stake to Hotel Shilla in a put option obligation but denied it was pulling out of the business.

Dongwha, opened in 1979 as the country's first duty-free shop in the downtown area, will transfer a 30.2-percent stake, or 543,600 shares, to Hotel Shilla. Combined with the 19.9-percent stake it already purchased in 2013 with the put option, Hotel Shilla will own 50.1 percent and become the largest shareholder. Dongwha said Kim Kee-byung, head of Lotte Tour Development Co., and people with special relations with him will retain the remaining 49.9 percent.

Dongwha officials said it has notified Hotel Shilla of its decision on Dec. 16. They denied they will giving up the duty-free business, claiming it is still competitive in the industry.

"Despite a number of new duty-free shops opening last year, we reached record sales of 354.9 billion won (US$309.47 million)," an official said. "Louis Vuitton did withdraw to move to a new duty-free shop, but we still have Chanel, Hermes and other luxury brands and have enough competitiveness."

Hotel Shilla, however, has said it is not interested in operating the downtown duty-free shop and wants Dongwha to repay the debt, arguing that Dongwha is financially capable of doing so. Dongwha is registered as a midsized operator, which would pose problems for conglomerate-class Hotel Shilla.

"We believe that Kim is able to meet the debt obligation, and we are asking for repayment," an official of Hotel Shilla said. "There is still some time, and we will continue negotiations with Dongwha."

The Korea Customs Service said it was not looking into the matter yet since there may be a number of varying circumstances along the way. It said it hopes for the two parties to reach an agreement on their own. 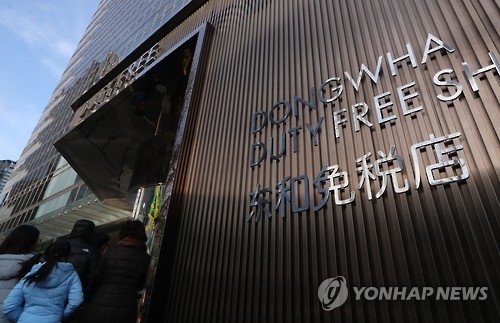