The Seoul High Court convicted former Chief of Naval Operations (CNO) Chung Ok-geun and his son on charges of "third-party" bribery, after the Supreme Court sent the case in June to the court for a retrial in a not-guilty ruling.

Third party charges are leveled against a person who exerts influence to help a third person or entity take bribes.

Following the ruling, Chung was immediately detained. His son was slapped with a two-year prison sentence suspended for three years.

Chung, who served as the CNO from 2008 to 2010, was indicted in March 2015. He was charged with pressuring two affiliates of STX Group in 2008 into offering 770 million won (US$671,726) to a yacht firm where his son was listed as a stakeholder in return for business favors.

In the latest trial, the prosecution changed the charges to that of third-party bribery from simple bribery charges, as the top court ruled that it was the company itself that took the money from the STX affiliates, not the former Navy flag officer.

"It is likely that Chung will take flak for the crime that he committed by using his position when he had to carry out his duties with more morality and integrity than anyone else, and should have taken care not to engage in any acts that could court suspicions," the court said in its ruling. 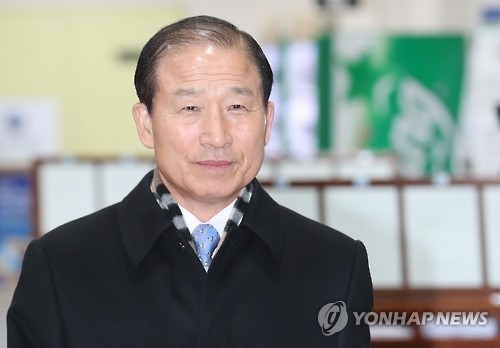