GOYANG, South Korea, Feb. 2 (Yonhap) -- The city of Goyang near Seoul will open an annual international flower show, with dozens of countries to showcase their floral products, on April 28, organizers said Thursday.

With the title of "The Ecstatic Flagrance of Flowers and the Smart City Goyang," the International Horticulture Goyang Korea 2017, the 11th of its kind, is scheduled to run through May 14 at the venue around the Lake Park in the city just north of the South Korean capital.

The flower exhibition is expected to bring together 120 firms from 25 countries including the Netherlands, Colombia, Ecuador and China.

Out of the exhibitors, 40 entities from 12 countries that include the Shanghai Botanical Garden, the organizing committee of the Russian Flower Expo and Dutch flower companies are to set up their national pavilions, according to the organizers. 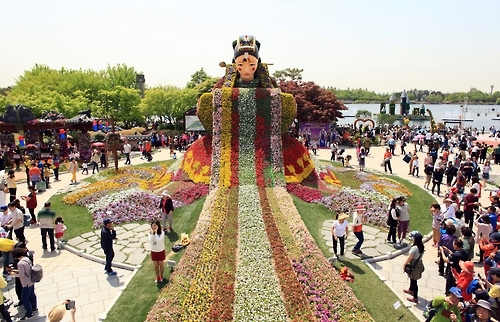 South Korea's regional governments, including the Seoul metropolitan government, as well as a total of 200 floricultural industry-related bodies, such as the National Institute of Horticultural and Herbal Science and the Korea Seed and Variety Service, will take part in the flower expo.

Lee Bong-woon, chief of the organizing committee, expects that the expo will generate more than US$30 million in exports for the sixth consecutive year.
(END)