SEOUL, Feb. 2 (Yonhap) -- Lucid dreaming is an elusive state in which you consciously know you are dreaming. Unlike a regular dream where there is no control over what you experience, a lucid dream offers you the possibility to control your surroundings.

The upcoming Korean sci-fi thriller "Lucid Dream" tells the story of a father who slips into his own dreams with help from a psychiatrist to locate his little boy kidnapped three years ago and find clues to track down his captor.

"The term 'lucid dream' may sound strange, but you may have experienced the phenomenon at least once without knowing," rookie director Kim Joon-sung said during a news conference for the film at a CGV theater in southern Seoul. 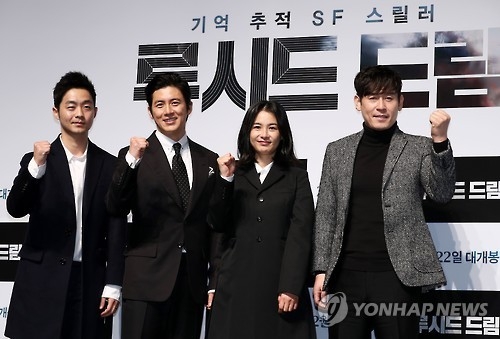 As a filmmaker who has often flown through the sky in his lucid dreams since his early years, Kim said he has always wanted to make a film about the subject matter.

And the success of the 2010 Hollywood sci-fi film "Inception," about a thief who steals corporate secrets through use of dream-sharing technology, convinced him to fulfill his dream -- making a feature debut with a film about lucid dreaming.

During the press conference, the movie's main cast all said they decided to be in the film mainly due to its "fresh" subject matter and intriguing screenplay.

"I enjoyed its lightweight feel, like reading a sci-fi novel, when I first checked the screenplay. But I got nervous and had sweaty hands after reading through it. So I told the director that I wanted in although I was not that good at acting," actor Go Soo said.

He played Dae-ho, a newspaper reporter with a specialty in unearthing corruption involving large conglomerates, who strives to find the whereabouts of his boy who was abducted from an amusement park as a premeditated plot three years ago. He then happens to find an article about lucid dreaming in a newspaper and visits his friend and psychiatrist So-hyun (Kang Hye-jung) to go back to the day when he lost his son and find clues for tracking the kidnapper using the lucid dreaming technique. 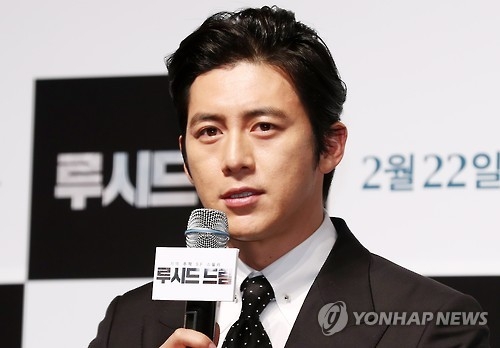 Veteran actor Seol Kyung-gu took the role of Bang-seop, a police detective in charge of the kidnapping investigation that showed no progress in its third year. He decides to reinvestigate the case after Dae-ho tells him about the possibility of finding clues through lucid dreaming.

"I thought the idea of lucid dreaming was interesting. I might have chosen not to do this work if the director was an old man, but he is quite young. I was really curious how this idea would work," Seol said.

Actress Kang agreed, saying, "When I first read the script the term 'lucid dreaming' was new and I was curious how this would be shown in a movie. After checking out many research materials, I realized that this was a phenomenon that people might have experienced at least once in their lives." 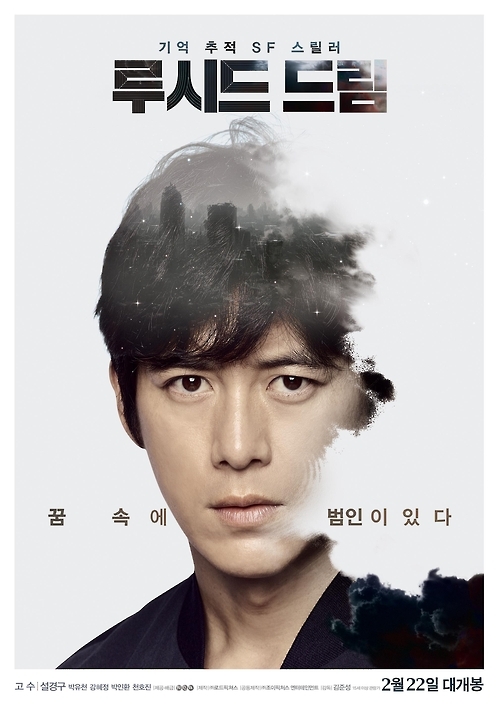 Park Yu-chun, a member of the popular K-pop boy band JYJ, plays an unnamed mysterious man in a black suit who confuses Dae-ho by abruptly appearing in his lucid dreams and later in the real world.

The film was originally set to be out last fall but pushed back the schedule after the 30-year-old singer-actor was accused of sexual assault by four women in June.

Although he was later cleared of the sexual assault charges, he is still under a probe by prosecutors on charges of prostitution and fraud.

Director Kim, however, denied allegations that the sex scandal was the main reason for the delay.

"It took longer than expected to complete the film because it has lots of computer graphics, which delayed the release," he said. Park did not attend the news conference because he is currently serving his two years of mandatory military service.

Despite concerns that the scandal may mar the film's image, the filmmaker cut out not a single scene with Park. "I didn't because his is a character who provides the decisive clue in the story," he explained.

The movie, presented and distributed by Next Entertainment World, is set to open in local theaters on Feb. 22. It is also scheduled to be unveiled in 190 countries around the world on the U.S. media streaming site Netflix.