A short video clip uploaded Wednesday on Yonhap News Agency's entertainment YouTube channel TongTong TV delves into the lyrics of the hit track featuring BIGBANG's G-Dragon. Zion.T talks about feeling self-conscious for being too short and skinny and the idol singer replies in a cute and arrogant way, "Sorry, that don't bother me 'cause I'm G-Dragon."

The lyrics of the song have also created a stir among fans for lines such as "If I can't sing, I just have to take my clothes off," which paints idols in a seemingly derogatory sense.

Nevertheless, the dialogue-style track snatched the No. 1 spot on Olleh Music, rising triumphant in the fiercely competitive music industry.

The tracks range from easy-listening to R&B and even bossa nova, and the themes range from "cute to dark" and are very self-referential.

The album marks the singer's first release after transferring to The Black Label, a subsidiary of YG Entertainment. Music critics are wondering if the musical thumbprint of the entertainment giant is embedded in the tracks.

Zion.T first made his debut in April 2011 with the song "Click Me" and gained nationwide recognition through his single "Yanghwa BRDG" released in 2014. 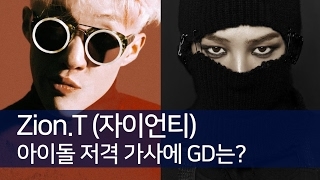