SEOUL, Feb. 2 (Yonhap) -- Former U.N. chief Ban Ki-moon fired a broadside at local political circles, denouncing their exclusiveness, division and backbiting, which he has cited as part of the reason for his decision to drop out of the presidential race this year.

During his meeting with reporters, Ban also voiced concerns that the divisive political climate would take its toll on the well-being of citizens.

A day earlier, Ban renounced his presidential ambitions in a surprise decision triggered by political offensives from his rivals, a deluge of negative reports and corruption allegations surrounding his relatives. Though he did not officially throw his hat into the ring, he was considered as a prominent conservative presidential contender.

"It is not desirable to say politics should be left only for politicos to do. Politics must be open to all citizens," Ban said. "(Politicians) do politics in their own exclusive political sphere ... That is not (right) politics." 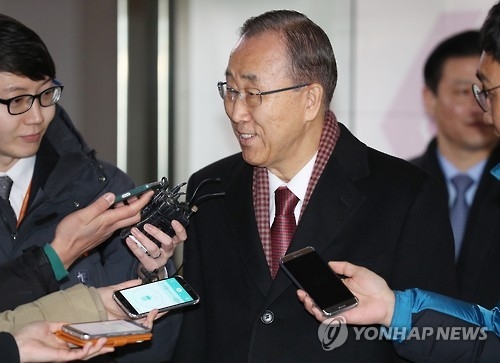 Earlier in the day, Ban told reporters that "politicians have failed to solve their political problems, as they are all divided over how to approach them."

"Those who move politics in actuality are politicians. They must be shaken up," he said.

The former foreign minister also pointed to a lack of public trust for establishment politicians, while stressing the importance of "political will" to solve important issues not just in South Korea but around the world.

"While serving as the U.N. secretary-general, I had stressed that all conflicts should be put to rest through political solutions," he said. "All problems in Syria, Iraq and Libya have originated from fights among politicians."

His idea was conceived to reduce administrative inefficiency stemming from the separation of key government agencies in Seoul and Sejong, Chung Jin-suk, former floor leader of the ruling Saenuri Party, told Yonhap News Agency over the phone.