TOKYO, Feb. 2 (Yonhap) -- Japanese public broadcaster NHK was accused by local civic groups on Thursday of selectively airing misinformed opinions that were in favor of an agreement between Seoul and Tokyo on the "comfort women" issue.

The groups -- Violence Against Women in War Research Action Center and the National Movement for Resolving the Issue of the Military Comfort Women -- held a press conference at the National Diet's House of Representatives to address what they called NHK's "biased program" on Jan. 24. 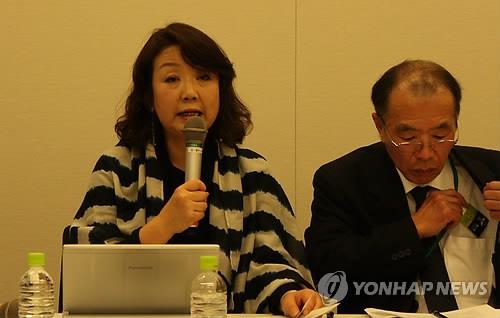 "NHK has created a bias towards South Korea by manipulating information regarding public opinion and movement. Despite the overwhelming opposition towards the Korea-Japan deal, (it) has reported as if that wasn't the case," the civic groups said.

In December 2015, South Korea and Japan reached an agreement in which Tokyo apologized for its colonial-era atrocities and agreed to provide 1 billion yen (US$9.4 million) for the creation of a foundation aimed at supporting the victims of Japan's wartime sexual slavery, euphemistically called comfort women.

According to the groups, NHK aired a news program on Jan. 24 that carried an interview of supposed experts and past comfort women, in which South Korea was portrayed as selectively focusing on voices opposing the deal and that a "Japan-bashing populism was spreading due to the comfort women matter."

The groups also claimed the program depicted Seoul as intentionally ignoring voices in favor of the agreement, framing a narrative of the South Korean government neglecting the victims' needs while Japan is trying to help them.

"(NHK) manipulated the image of Korean public opinion as being non-objective," the groups argued, claiming that the program was viciously biased and intentionally catered to the Japanese government's claims.

The deal was lauded by the international community as a step in the right direction given that the comfort women issue has been a long-standing obstacle to ties between the two neighboring countries.