WASHINGTON, Feb. 2 (Yonhap) -- U.S. Defense Secretary Jim Mattis said that none other than North Korea needs to worry about the planned deployment of the U.S. THAAD missile defense system in South Korea.

Mattis, who arrived in Seoul on his first overseas trip since taking office, made the remark to reporters traveling together with him on the plane, stressing THAAD is a defensive system, according to a transcript provided by the Pentagon.

"There's only one reason that we even have this under discussion right now, and that is North Korea's activities," Mattis said. "THAAD is for defense of our allies' people, of our troops who are committed to their defense."

"Were it not for the provocative behavior of North Korea we would have no need for THAAD out here. There's no other nation that needs to be concerned about THAAD other than North Korea," he said.

South Korea and the U.S. decided last year to deploy a THAAD unit to defend better against the North.

China has strongly called for scrapping the decision, seeing THAAD as a threat to its nuclear deterrent and other security interests, despite repeated assurances from Washington that the system is designed only to defend against the North. 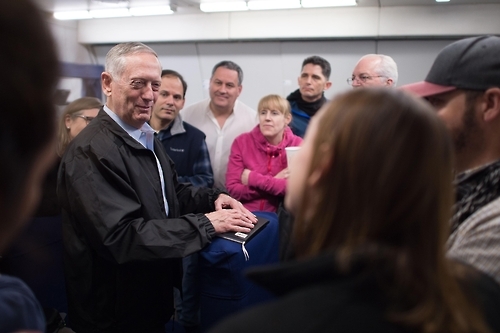 The trip came amid heightened tensions on the Korean Peninsula after North Korean leader Kim Jong-un said the country is close to test-firing an intercontinental ballistic missile, an apparent threat the country is perfecting capabilities to strike the U.S. with nuclear weapons.

"One of the reasons I want to come out and talk to the leadership out here, they live in the neighborhood. They watch this as an existential to them, and I need to get to some -- some data from them. I need to get their appreciation of the situation before I start making statements on where I stand on it," he said.

"Basically, what we're doing is what we talked about earlier today, it's a priority for the President Trump's administration. We pay attention to the Northwest Pacific, to our two strong allies," Mattis said of the trip to South Korea and Japan.

"Two of the most enduring alliances that we have had have been between Japan and us, and of course South Korea and the United States, and together we confront the North Korean situation," he said. "I want to listen to them, engage with their political leaders, listen to some of their briefs, get an understanding of their view of the situation."

Mattis said South Korea is not new to him, saying he was in the country as a young officer in 1972.

"But I've been not back out here in a long, long time. So I'm going to get current by listening to them, finding out where their issues are, and then we're going to work together and strengthen our alliance," he said.

Mattis: None other than N. Korea needs to worry about THAAD

Mattis: None other than N. Korea needs to worry about THAAD