WASHINGTON, Feb. 2 (Yonhap) -- U.S. President Donald Trump said Thursday he will speed up renegotiation of the North America Free Trade Agreement (NAFTA), slamming the deal as a "catastrophe" for the U.S.

Trump said the letter F in NAFTA should mean not only for free, but also fair as well.

"So all of the statutory guidelines we're adhering to. I would like to speed it up if possible," he said. "I don't care if it's a renovation of NAFTA or a brand-new NAFTA. But we do have to make it fair. And it's very unfair to the American worker and very, very unfair to companies who do business in this country."

During the campaign, Trump blamed free trade deals as a key cause of job losses and other American economic problems in an attempt to woo voters struggling with economic difficulties. Since taking office, Trump also made protection of American workers and companies from foreign competitors his No. 1 priority.

Last month, Trump withdrew the U.S. from the 12-nation free trade deal Trans Pacific Partnership, and has since stepped up attacks on NAFTA. That in turn has spurred concern that the U.S. free trade pact with South Korea could be his next target, as he denounced the pact during the campaign as a disaster and a job-killing deal. 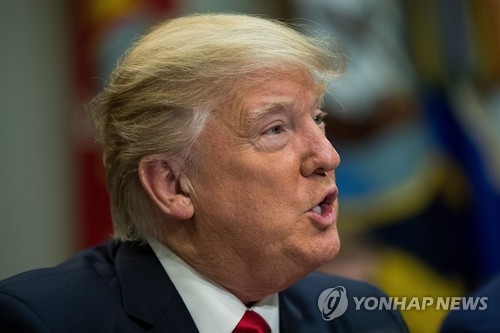 Since the inauguration, Trump has clashed with some foreign leaders, leading to Mexico's president calling off a scheduled summit after Trump said the neighboring nation should pay for a border wall aimed at preventing illegal immigrants from entering the U.S.

Earlier Thursday, Trump sought to dispel concern about his handling of foreign policy.

"We're taken advantage of by every nation in the world virtually. It's not going to happen anymore," he said.