SEOUL, Feb. 3 (Yonhap) -- More than eight out of 10 tobacco shops near primary and secondary schools in South Korea don't abide by a ban on externally visible cigarette advertising, a poll showed Friday.

According to the survey on 2,800 smoke shops in neighborhoods near elementary, middle and high schools nationwide, 82.7 percent of the respondents were found to flout the restriction on advertising outside the retail establishments.

By South Korean law, cigarette advertisements should not be visible from the outside of over-the-counter tobacco retailers. Billboards, stickers and posters should be located inside.

The ban is designed to limit adolescents' exposure to cigarette advertising, which is known to have a considerable impact on causing them to start smoking. 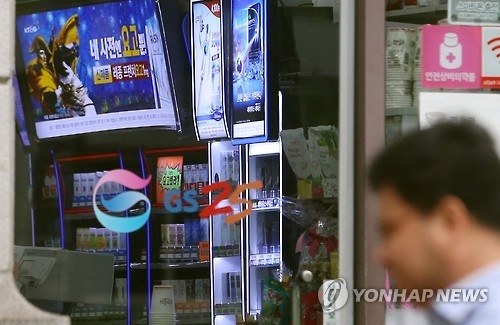 According to the findings, slightly over 95 percent of the 1,690 convenience stores engaged in outdoor advertising, while 63.4 percent of the 1,020 supermarkets had externally visible advertisements.

The number of convenience stores' advertisements averaged 20.8, up from 16.8 a year earlier, the survey also showed.

The institute said it is desirable to ban tobacco advertising in all smoke shops for the sake of smokers and nonsmokers as well as adolescents. The Ministry of Health and Welfare said it is pushing to prohibit all cigarette advertisements within a radius of 50 meters from school gates.

According to a government report released in early November last year, the smoking rate among South Korea's middle and high school students came to 9.6 percent in 2016, down from 11.9 percent a year earlier. It marked the first time for the rate to drop below 10 percent.

The decrease was attributed largely to sharp hikes in tobacco prices here, with the price for pack rising from 2,500 won (US$2.19) to 4,500 won early last year.
(END)