According to a Gallup Korea poll, Moon Jae-in, former head of the main opposition Democratic Party, remained as the most favored potential candidate with 32 percent.

The survey also indicated supporters of Ban are turning to South Chungcheong Gov. An and Acting President and Prime Minister Hwang.

An, who is also affiliated with the opposition party, shot up to the second place at 10 percent, a whopping 7 percentage point increase from a month earlier. He is supported by voters in the central provinces where Ban's hometown is located.

Hwang, who is cited as a replacement of Ban in the conservative bloc, took third place by garnering 9 percent, up 6 points over the past month.

The poll was conducted on Wednesday and Thursday with 1,003 voters with a sampling margin of 3.1 points.

Ban, who renounced his presidential ambitions on Wednesday afternoon, got 8 percent. Some 390 responded before his announcement, after which the number of Ban supporters noticeably decreased, the company said. 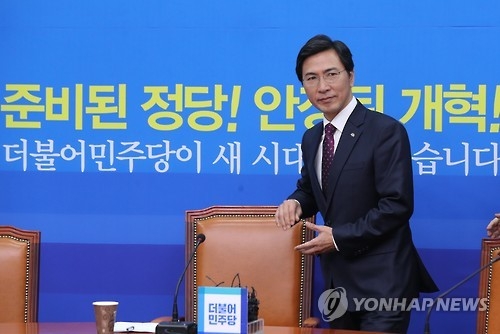 Liberal governor rises to No. 2 in presidential poll as Ban bows out

Liberal governor rises to No. 2 in presidential poll as Ban bows out