(ATTN: UPDATES with Pentagon statement at bottom)
By Choi Kyong-ae

SEOUL, Feb. 4 (Yonhap) -- U.S. Defense Secretary James Mattis on Friday reiterated Washington's security commitment to Seoul, saying that any nuclear attack by North Korea on the U.S. or its allies would receive an overwhelming response.

Mattis made the remarks during a press briefing ahead of a meeting with South Korean Defense Minister Han Min-koo in Seoul, with the policymaker striving to reassure the Asian ally unsettled by President Donald Trump's isolationist rhetoric.

"America's commitments to defending our allies and to upholding our extended deterrence guarantees remain ironclad: any attack on the United States, or our allies, will be defeated, and any use of nuclear weapons would be met with a response that would be effective and overwhelming," Mattis said.

On the campaign trail, Trump threatened to withdraw U.S. forces from South Korea and Japan unless the allies agree to pay more for the upkeep of the troops stationed in the countries.

About 28,500 U.S. troops are based in South Korea to deter North Korean aggression, a legacy of the 1950-53 Korean War, which ended in a truce, not a peace treaty. Seoul currently pays roughly half the costs, about US$900 million a year, to help finance the troop presence.

During the talks, Han and Mattis focused on ways to deepen collaboration and strengthen the bilateral strategic alliance but defense cost-sharing was not on the agenda, the defense ministry said. 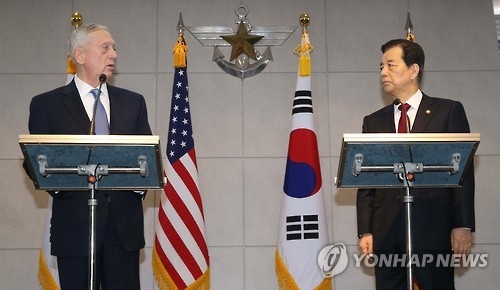 The retired Marine Corps general arrived here on Thursday for a two-day visit for talks with top Seoul officials. On Thursday, he met with South Korea's acting president and prime minister, Hwang Kyo-ahn, to underscore the "priority" that the Donald Trump administration places on the South Korea-U.S. alliance.

"The defense ministers' talks here in itself indicates trusted bonds between the allies and will definitely serve as a stern warning toward the North," he said.

On Friday, the defense chiefs reaffirmed that the allies will push forward the deployment plan "within this year," the defense ministry said. In November, U.S. Forces Korea Commander Gen. Vincent Brooks said the THAAD system will be deployed within eight to 10 months.

The U.S. has repeatedly stressed that the system is defensive and aimed only at deterring North Korean threats. But China and Russia have strongly opposed the deployment, saying the move could hurt their strategic security interests.

Russian Ambassador to South Korea Alexander Timonin said Friday, "We will have no choice but to draw a certain conclusion once the THAAD installation is complete. We will have to take certain types of countermeasures to guarantee our own security." 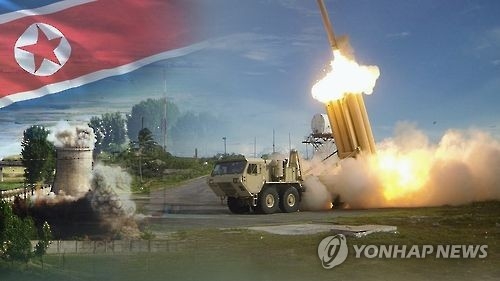 They also agreed to conduct larger Key Resolve and Foal Eagle joint military exercises in March as a deterrent against nuclear-armed North Korea, the ministry said without elaborating. The North views the annual drills as preparation for a northern invasion and counters by ratcheting up tensions.

The Pentagon said in a statement that Mattis told Han and Yun that the decision to visit South Korea in his first overseas trip as secretary underscores the "priority the Trump Administration places on the Asia-Pacific region, and on strengthening the U.S.-ROK alliance."

"Secretary Mattis said that the United States remains steadfast in its commitment to the defense of the ROK people. He further emphasized that any attack on the United States, or its allies, will be defeated, and any use of nuclear weapons would be met with a response that would be effective and overwhelming," Pentagon spokesman Cmdr. Gary Ross said in a statement.

Mattis departed for Japan Friday afternoon after laying a wreath at the Tomb of the Unknown Soldier in the Seoul National Cemetery.

Last year, Pyongyang carried out two atomic tests 24 missile launches to achieve its stated goal of developing an nuclear-tipped long-range missile that could strike parts of the U.S. mainland.