The event appeared to be aimed at drumming up a marketing campaign for KT's technology ahead of the 2018 PyeongChang Winter Olympics, in which luge is a sport.

With a virtual reality headset, the device allows visitors to enjoy the sport of luge. 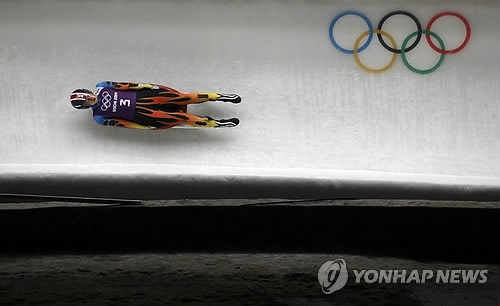 KT also plans to introduce virtual reality contents on K-pop during the Mobile World Congress show, which will begin its five-day run on Feb. 27.

KT is stepping up efforts to begin a trial service of the fifth-generation (5G) mobile network during the PyeongChang Games. The 5G technology aims to offer data transmission speeds about 100 times faster than the current fourth-generation wireless networks.

KT's chief executive, Hwang Chang-gyu, will make a keynote speech at the show. Details of Hwang's speech were not known, but he is expected to lay out the company's plans for 5G mobile technology and the so-called Internet of Things in which any object can be connected with the Internet, as well as artificial intelligence.

Hwang is among 18 chief executives who will deliver keynote speeches at the show.
(END)