SEOUL, Feb. 3 (Yonhap) -- The North Korean authorities are compelling ethnic Chinese with Chinese nationality living in the North to pledge their allegiance to the family of leader Kim Jong-un, a U.S. broadcaster said Friday.

A source in North Hamgyong Province told the Radio Free Asia (RFA) that ethnic Chinese residents in the North are pressured to pay allegiance to the Kim family just like North Koreans do. "Most ethnic Chinese regret that they came to North Korea and wish to return to China," the source was quoted as saying.

Chinese residents in the North are expected to prepare for a singing event aimed at pledging allegiance to the family. They are also required to make donations to the authorities on the birthdays of Kim's father and late former leader Kim Jong-il and his grandfather and the country's founder Kim Il-sung, which fall on Feb. 16 and April 15, respectively, according to the source. The two birthdays are two of the North's biggest holidays. 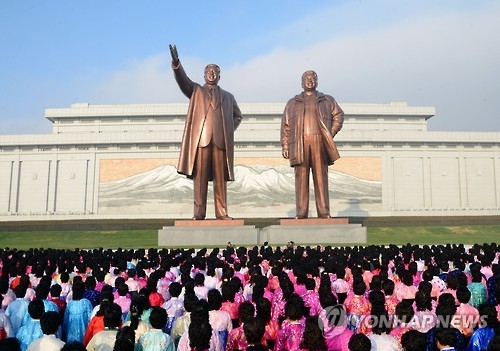 About why they have to glorify the Kim's family, the source said whether the authorities will approve of exit visas for trips out of the country depends on how cooperative they were in civilian obligations.

Another source in South Hamgyong Province revealed that Chinese residents have to learn various songs and dances in preparation for the holidays and lay baskets of flower in front of statues of the two former leaders on those days, a must for those who are kept under surveillance of the Ministry of State Security.

The source blamed the Chinese government for not taking enough measures to protect its own people in the North, claiming officials from the ministry even tortured some Chinese residents who provided monetary donations for recovering flood-stricken areas in North Hamgyong Province to the authorities last year.