"The secretary expressed full backing" of Foreign Minister Yun Byung-se's point that diplomatic pressure and military deterrence policy continue to be the two main pillars in addressing the North Korean nuclear issue and they should be further strengthened under the Trump administration, the Ministry of Foreign Affairs said.

The understanding was reached during early morning talks between Yun and Mattis in Seoul. The policymaker arrived in the capital Thursday in the first ever overseas trip by the U.S defense secretary since the Trump government took office last month.

The trip is seen as the Trump administration's prompt efforts to solidify its treaty alliance with South Korea following Trump's criticism of the Asian country's joint defense cost expenditures.

The trip also reflects escalating security uncertainties on the Korean Peninsula after North Korean leader Kim Jong-un said in his New Year's Day address that the country is preparing to test an intercontinental ballistic missile.

Mattis said South Korea and the U.S. will maintain a strong joint defense posture to react to any form of North Korean provocations in a resolute and powerful manner.

The South Korea-U.S. alliance remains "rock solid" and the U.S. will always be with South Korea, the ministry quoted Mattis as telling Yun. "You can count on 100 percent" of the U.S. pledge to defend South Korea, according to a ministry statement.

Yun and Mattis also agreed that their countries will work closely together to ensure China plays its role in curbing North Korea's development of nuclear capabilities, the ministry said.

Both sides shared the understanding that China's role is crucial in tackling the North Korean nuclear issue and consented that they will closely cooperate to find ways to ensure that Beijing plays a "constructive role" on the matter and thoroughly implements United Nations Security Council resolutions against Pyongyang, according to the ministry.

The top officials also agreed that they will stick to the plan to deploy the Terminal High Altitude Area Defense system as previously scheduled since it does not compromise the national interests of any neighboring country, the ministry said. They said the deployment is only intended to guard against North Korean military threats.

The allies announced a year earlier the plan to deploy the U.S.-made air defense shield in South Korea by the end of 2017. But the deployment and the set schedule had come under attack amid intense Chinese objections and the impeachment of President Park Geun-hye who forged the agreement. 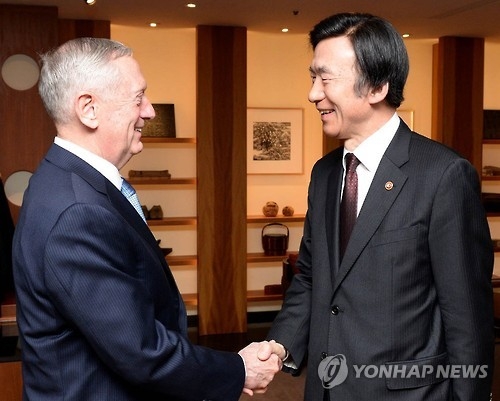 During the talks, Yun stressed that North Korea's nuclear and missile capabilities have reached an advanced level which is fundamentally higher than in the past as he made his case for the U.S.' sturdy defense support for Seoul.

The foreign minister claimed that "all possible means" should be mobilized in tackling North Korean threats, urging the U.S. to intensify security dialogue with interested parties through bilateral engagements and defense-ministerial consultative channels.