SEOUL, Feb. 3 (Yonhap) -- Russia will consider taking countermeasures to protect its own security if the United States pushes ahead with its planned deployment of an advanced anti-missile system on South Korean soil, the country's top envoy in Seoul said Friday.

Russian Ambassador to South Korea Alexander Timonin said that the stationing of the Terminal High Altitude Area Defense (THAAD) system on the Korean Peninsula will have a "dangerous" impact on ongoing efforts to secure regional peace and stability.

"We will have no choice but to draw a certain conclusion once the THAAD installment is complete," he said during a press conference held in the Russian Embassy located in central Seoul. "We will have to take certain types of countermeasures to guarantee our own security."

In July, South Korea and the United States announced a plan to set up a THAAD battery by the end of this year to better cope with the growing military threats from North Korea. China and Russia have strongly opposed the plan, saying it could hurt their strategic security interests.

Earlier in the day, U.S. Defense Secretary James Mattis visiting Seoul reiterated Washington's stance, saying that deploying the THAAD anti-missile unit to South Korea is to protect America's allies and its own troops. 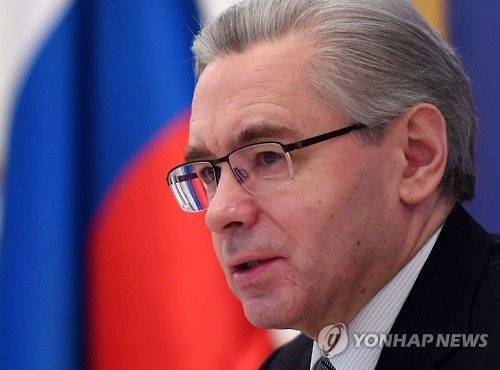 Timonin said he does not want to elaborate on what impact the THAAD deployment will have on Russia-South Korea relations, adding that Moscow is still hoping that the decision could be withdrawn.

The ambassador, however, made it clear that the reason why Russia is opposed to THAAD is because it is regarded as part of the U.S.' global missile defense system that surrounds its own borders.

"We see it as a threat to our national security," he said.

He admitted that the cacophony over THAAD could affect Russia-South Korea relations but still drew attention to the importance of economic cooperation between the two countries, hinting that the impact will not go as far as to hurt their ties in business.

"Our bilateral economic cooperation is important as much as the THAAD issue. It could be more important than that," he said, adding in Korean, "Don't worry."

Regarding the North, he reiterated Russia's commitment to UNSC resolutions adopted to penalize Pyongyang for its continued pursuit of nuclear weapons but underlined the need for talks, as well as trying to find a "peaceful" solution.

"Russia is willing to take every possible measure in accordance with UNSC resolutions and no progress has been made in cooperation with the North in military and political areas," he pointed out.

"But we think that the sanctions should not be pursued in a way that a possibility of talks with the North is ruled out or blocked," he added. "Our stance is that the impact on the North Korean people should also be minimized."

He called for the resumption of the long-suspended six-party talks to discuss the North's denuclearization, saying that Russia is "ready" to participate in the multilateral negotiation process.

The six-party talks involving South and North Korea, the United States, China, Japan and Russia have been stalled since late 2008, when the North opted not to engage in negotiations.

"Russia is ready to actively join the talks, and we will be able to offer our version of solution," he said. "Most countries involving the (North's) nuclear issue see the six-party talks as an effective and constructive format."