SEOUL, Feb. 3 (Yonhap) -- South Korea on Friday embarked on a quest for its record medal haul at the upcoming Asian Winter Games.

About 50 athletes and officials were on hand at the National Training Center in Seoul for the team launching ceremony for the Winter Asiad, to take place in Sapporo, Japan, from Feb. 19 to 26.

South Korea will send 220 athletes and officials in five sports, with an eye on winning at least 15 gold medals for a second-place finish.

The first batch of athletes will depart for Sapporo next Friday, and the main delegation will leave on Feb. 15.

This will be the eighth Asian Winter Games. South Korea's current record for the gold medal tally is 13 from the 2011 edition, co-hosted by Astana and Almaty in Kazakhstan. 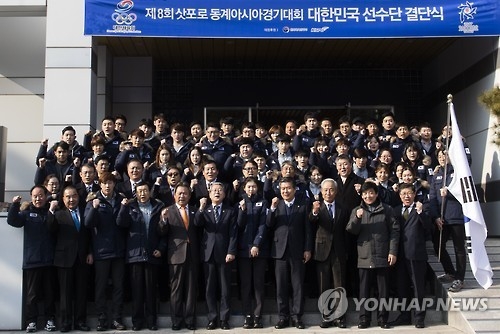 The Sapporo competition takes on extra significance because it will be held almost exactly a year before the next Winter Olympics in South Korea's PyeongChang. It will be the first Winter Games to be held in the country.

Many of South Korea's Olympic medal hopefuls will compete in Sapporo, for an opportunity to measure themselves against their regional rivals.

Lee Kee-heung, head of the Korean Sport and Olympic Committee (KSOC), said the athletes should try to use the Sapporo competition as a launching pad for PyeongChang 2018.

"We all know how much blood and sweat you have shed over the years to try to make the country competitive in winter sports," Lee said. "I hope your dedication will bear fruit in the form of medals in Sapporo. The KSOC will spare no efforts to make sure you will compete in the best environment." 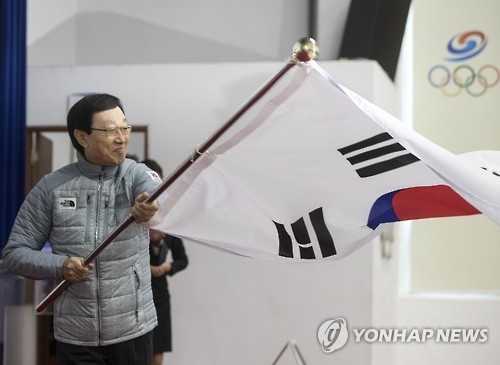 "The country is in an uncomfortable situation, and I hope the Asian Winter Games will be an opportunity for our athletes to give people new hope," Yu said. "Also, I hope you will help pique people's interest in winter sports with the PyeongChang Winter Olympics about a year away."

Kim Sang-hang, president of the Korea Skating Union and the chef de mission for the South Korean delegation, said the Sapporo competition will be an important part of the build-up to PyeongChang.

"We're going to represent the country with pride, and try to set example for other countries with fair play," Kim added.