The clip, titled "Dynamic Movement," was posted on the official website of the idol act's agency FNC Entertainment.

In the video the nine members -- Inseong, Youngbin, Jaeyoon, Dawon, Rowoon, Zuho, Taeyang, Hwiyoung and Chani -- dance powerfully to "Roar," an EDM song combined with trap beats, which sends out the message not to waste youth and to strive for your dreams.

SF9's first album "Burning Sensation," set to come out next Monday, consists of six tracks that depict the musical development and color of the group, which made its debut last October.

The act is slated to hold a showcase event on the day of release, which will be followed by various promotional activities. 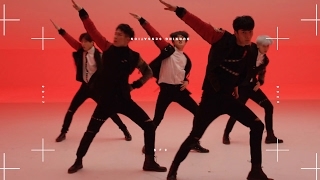