The operating profit is the highest since 2011.

"Favorable business conditions, such as low oil prices, as well as the company's restructuring efforts, helped improve its earnings," the company said in a press release.

The company noted its restructuring efforts included sales of noncore assets, such as its 50 percent stake in Kumho Asiana Plaza Saigon.

It earlier said its debt ratio came to 572.2 percent as of end-September, down more than 490 percentage points from end-2015.

In the fourth quarter, however, its net loss widened to 116.1 billion won from 51.3 billion won in the same period last year.

Its sales advanced 6.2 percent on-year to 1.48 trillion won, with operating profit coming to 40.8 billion won to mark a turnaround from a loss of 1.2 billion won in the fourth quarter of 2015. 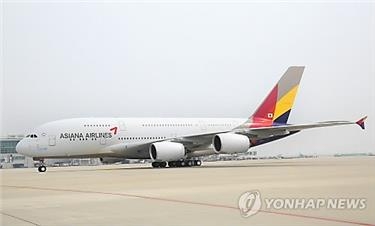 Asiana Airlines swings to black in 2016

Asiana Airlines swings to black in 2016