Lee will make his Winter Asiad debut in Sapporo, Japan, starting on Feb. 19. The double gold medalist at the 2010 Vancouver Winter Olympics has been enjoying a career renaissance this season at 27, and he hopes to maintain his momentum heading into the Asian event.

"This will be my first Asian Winter Games, and there are even more important events coming up after this," Lee said prior to the Korean delegation's team launch ceremony at the National Training Center in Seoul. "I'll do my best in my main events, the 1,000m and 1,500m, and will also try to help the team reach the podium in the relay." 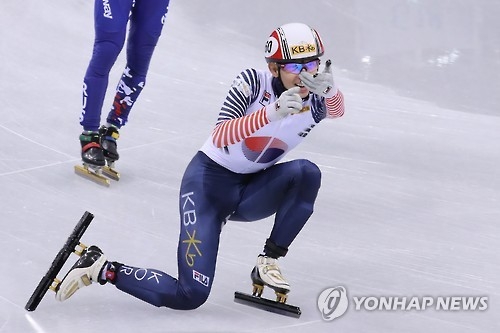 And as nice as it'd be to win his first Winter Asian Games gold, Lee said he is more focused on gearing up for the next Winter Olympics, which will be held in South Korea's PyeongChang next year.

"The world championships will be a couple of weeks after Sapporo, and a good performance there will have a positive impact on PyeongChang," he said. "My goal is to stay healthy over the next year or so for the Olympics."

Lee, though, has been one of the few bright spots for the inconsistent men's short track team, while the women's team has dominated the competition, led by former Olympic and world champions, Choi Min-jeong and Shim Suk-hee.

Lee said the men's squad is "coming around slowly" and should be ready to compete at a higher level at the Olympics.

"The most important thing is whether we can contend for medals at the Olympics (rather than at competitions this year)," he added. "There are some up-and-coming skaters from other countries. We all have to break down their strengths and weaknesses, and pay attention to every little detail to get ready for PyeongChang."