A Hyundai Merchant ship carrying a total of 317,000 eggs that weigh 19 tons departed the U.S. city of Seattle on Jan. 21 and arrived at the southern port of Busan on Tuesday, the company said.

It marks the first time for imported eggs to enter the country via ship. Eggs have so far been flown into the country by chartered flights.

"More than 1.2 million eggs from the United States will additionally be shipped through Busan Port on Feb. 8 or Feb. 9," said a Hyundai Merchant official.

U.S. eggs are usually white in color, while locally produced eggs are usually brown, making it easier for buyers to confirm the place of origin. South Korea's daily egg output had been 42 million eggs on average but fell below the 30 million level since the bird flu outbreak. 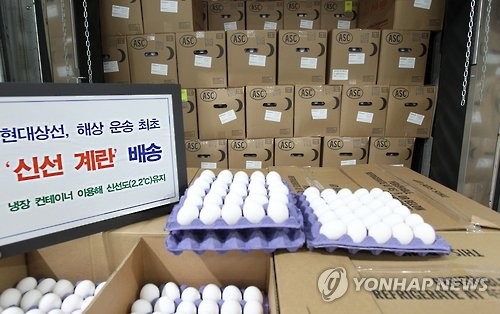