Brion Company said Kim, born to a Norwegian father and a Korean mother, decided to pull himself out of the men's 1.5km sprint classic at FIS Cross-Country World Cup because of flu symptoms. The 18-year-old on Thursday had a practice session at Alpensia Cross-Country Skiing Centre in PyeongChang, Gangwon Province, some 180 kilometers east of Seoul, and also registered as one of 56 skiers for the men's 1.5km sprint classic on Friday.

The agency, however, said the skier's physical condition got worse and added it is still uncertain whether Kim will compete in the skiathlon event on Saturday.

Kim won two gold medals and one silver medal at the 2016 Winter Youth Olympics in Lillehammer, Norway. He has been considered the top South Korean prospect for this FIS Cross-Country World Cup, which is being held in the country for the first time.

Kim, whose Norwegian name is Magnus Boe, last year decided to compete for South Korea in a bid to help the sport's development in the country. 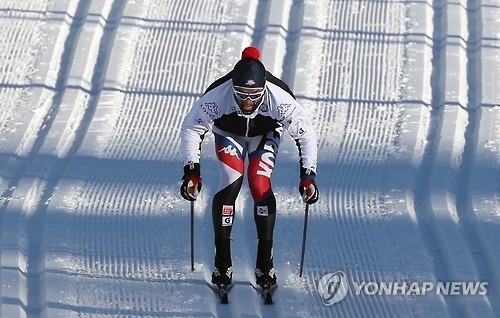