Director Park Kwang-hyun and the leads Ji Chang-wook, Shim Eun-kyung and Ahn Jae-hong on Thursday met with the movie's much-awaited fans at the Megabox-COEX theater in southern Seoul where they revealed various behind-the-scenes stories, prepared sessions for the actors and fans to carry out missions together, and gave out presents.

As part of the mission, Ji sang a portion of his song "I'll Protect You" from the soundtrack of the TV drama series "Healer" in which the actor played the lead role. The 29-year-old, known to have deep affection towards his fans, gave his mission partner a hug while mesmerizing the audience with his emotionally rich vocals.

In the upcoming film, Ji plays Gwon-yu, a jobless young gamer who is jailed after being framed for murder but is determined to unearth the truth with help from other members of his online gaming group. His role marks his silver screen debut. Actress Shim of the 2013 box office hit "Miss Granny" and Ahn of the popular television series "Reply 1988" play the two other gamers named Yeowul and Demolition.

Director Park, best known for his hit comedy-drama film "Welcome to Dongmakgol" released in 2005, hopes many young moviegoers would empathize with the flick, as it bears a close resemblance to Korea today featuring Google's AlphaGo AI program and a plethora of cyberspace hackers. 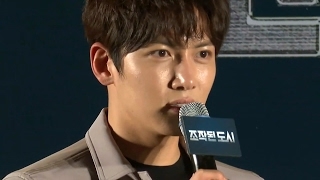