Frenzel is in South Korea for the the first time to compete at the International Ski Federation (FIS) Nordic Combined World Cup in PyeongChang, Gangwon Province, some 180 kilometers east of Seoul. The FIS competition this week is one of the test events for the 2018 PyeongChang Olympics.

"I have a good feeling," Frenzel told Yonhap News Agency before entering the preliminary competition round at Alpensia Ski Jumping Centre. "This place has a nice hill, and it's in good condition. My goal is to win the Olympic gold medal again here next year."

Frenzel is considered one of the top Nordic combined skiers of his generation. The 28-year-old German won the gold medal in the 10km individual normal hill at the 2014 Winter Olympics. He has 37 World Cup wins and also topped overall World Cup standings for four consecutive seasons.

Frenzel is currently No. 1 in World Cup rankings followed by his two German compatriots, Johannes Rydzek and Fabin Riessle. All three will compete for two Gundersen events set for Saturday and Sunday and are all considered top contenders for the title here.

"We've been doing this sport for a long time," Frenzel said of his country's strength in Nordic combined. "We have long tradition and good trainers."

"Nordic combined is a nice sport," he said. "He (Park) can bring many more South Koreans with impressive performance here. He is the only one right now, but I believe there will be more people competing in this sport in Korea."

Frenzel, who came to PyeongChang following his World Cup victory in Austria, said he struggled to adjust to the hill here, but is ready to show his best performance to local fans.

"My goal is to have a good performance on this charming hill," he said. "I struggled a little bit (in the practice), but I know what I need to do for tomorrow. I'll be in good condition." 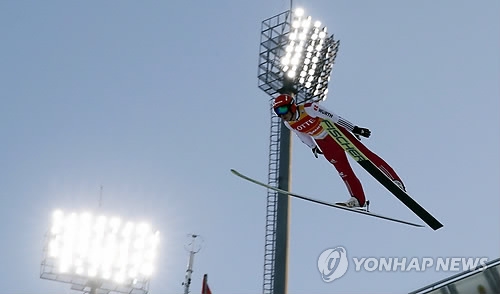