"It was a very difficult day and it was a difficult track," he said. "I'm very happy today becuase it was my first podium finish after six years. I've waited for a long time."

On the women's side, Anamarija Lampic claimed her first-ever World Cup win after finishing a 1.4-kilometer race at 3:41.97.

"I didn't expect this win," the Slovenian said after the race. "I just wanted to be in the final, but I won."

No South Koreans qualified for the finals featuring the top 30 skiers. The country's cross-country hopeful Kim Magnus, a double gold medalist at the the 2016 Winter Youth Olympics in Lillehammer, Norway, pulled out of the race due to flu-like symptoms.

The FIS competition will continue with skiathlon events on Saturday and team sprint races on Sunday. 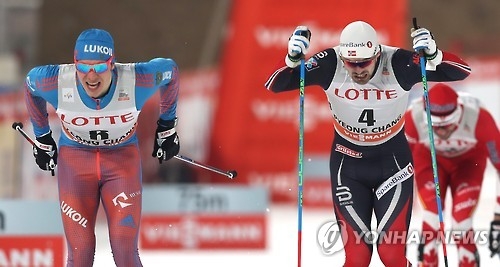