WASHINGTON, Feb. 3 (Yonhap) -- The United States imposed sanctions Friday in response to Iran's ballistic missile test in the latest in a series of developments that could suggest how the administration of President Donald Trump would deal with a threatened missile test by North Korea.

The Treasury Department blacklisted 13 individuals and 12 entities accused of assisting with Iran's missile program. It is the first package of sanctions that the Trump administration has imposed against Tehran, which test-fired a ballistic missile on Sunday.

"Iran's continued support for terrorism and development of its ballistic missile program poses a threat to the region, to our partners worldwide and to the United States," John Smith, acting director of the Treasury's Office of Foreign Assets Control, said in a statement.

"We will continue to actively apply all available tools, including financial sanctions, to address this behavior," he said. 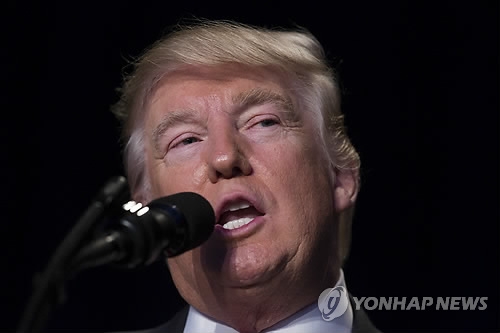 The sanctions came after Trump's national security advisor said Wednesday that the U.S. was "officially putting Iran on notice" for the missile test in a display of toughness by the Trump administration, which has heavily denounced the nuclear deal the previous administration of Barack Obama concluded with Tehran.

Asked if he's willing to consider a military option, Trump said Thursday that "nothing is off the table." On Friday, Trump tweeted, "Iran is playing with fire -- they don't appreciate how 'kind' President Obama was to them. Not me!"

The series of actions by the Trump administration could have bearings on North Korea.

Iran's missile test came after North Korean leader Kim Jong-un said in his New Year's Day address that the country has entered the final stage of preparations to test-fire an intercontinental ballistic missile, an apparent threat he is close to perfecting capabilities to strike the U.S with nuclear weapons.

In response, Trump vowed to stop the North from mastering such ICBM capabilities, saying that the North's development of a nuclear missile capable of striking the U.S. "won't happen," though he didn't elaborate on how he would stop it.