SEOUL, Feb. 4 (Yonhap) -- South Korean slugger Park Byung-ho has been designated for assignment by the Minnesota Twins, facing a likely demotion to the minors.

The Twins made the move Friday (local time) to make room for reliever Matt Belisle on their 40-man roster.

Park, who made his major league debut last season as the Twins' designated hitter, must wait and see if any other team claims him off waivers over the next seven days. If he clears waivers -- meaning, if no club picks him up -- Park then may be sent outright to the Twins' minor leagues or released.

Only those with more than three years of service in the majors or those who have been outrighted previously may reject the assignment to the minors and declare free agency.

After winning two MVPs and posting back-to-back 50-homer seasons in the Korea Baseball Organization (KBO), Park struggled mightily in his first big league season. He batted just .191 with 12 home runs and 24 RBIs in 62 games before getting demoted to the minors and undergoing season-ending hand surgery in August.

Park signed a four-year deal worth US$12 million in late 2015, and the remainder of his contract means other clubs may shy away from claiming him, given his sub-par rookie season. 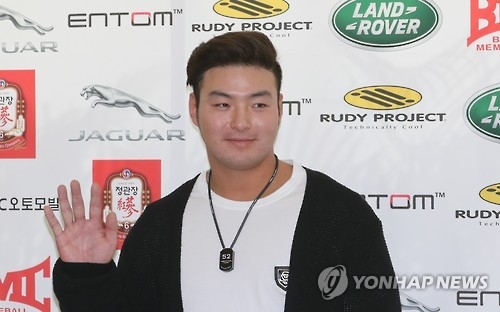 The Twins are apparently hoping to keep Park in the organization and let him compete for the primary DH job.

"There's some time before we have to make decisions. But I think Byung-ho will have a better showing than he did last year," Falvey added. "Any time a player transitions, there are always challenges that come along with that. We're hopeful for him. I know he's put in work and time this offseason, so we'll see where it goes the next few days."

Park left South Korea on Thursday for Florida, where the Twins will set up their spring training camp later this month. Park told Korean reporters at the time he knew he would face a tougher challenge than a year ago to win playing opportunities, and that he'd adopted a more compact swing to better catch up to big league fastballs.

Early last season, Park flashed some prodigious power that had made him such a dominant slugger in the KBO. Six of his 12 home runs came in April, and he launched some moon shots that made highlight reels across the majors.

Park struck out 80 times in 244 plate appearances, but when he did put the ball in play, he made hard contact.

Park had an average exit velocity of 97.2 miles per hour on fly balls and line drives, putting him in 10th place in the majors.